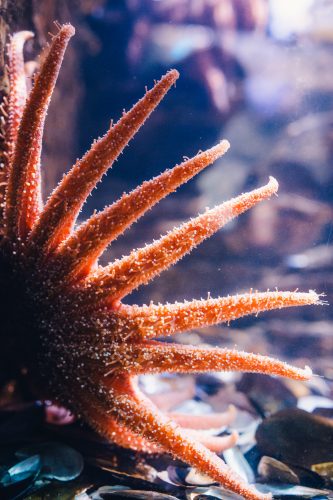 Starfish (Asteroidea), like sea urchins, sea cucumbers, ophiuroids and crinoids belong to the phylum of echinoderms, i.e. animals characterized by a radial body symmetry. The Sunflower sea star is the only representative of the genus Pycnopodia occurring only in the northeastern part of the Pacific. Before 2013, it was commonly found in the area ranging from the Aleutian Islands in Alaska to San Diego, California. It prefers a tidal zone with sandy, muddy, gravel as well as rocky bottoms. It also lives among meadows of underwater vegetation. The body of this starfish is fleshy and requires constant contact with water, so in the event of a high outflow it will move into deeper areas. Most often it occurs up to a depth of 120m, although it was also observed at a depth of 435 m.

It is one of the largest and heaviest starfish in the world. The maximum span of its arms is about 1m (usually 80 cm), and the weight reaches 5 kg. It also has the highest number of arms, ranging from 16 to 24, while most starfishes have 5 to 14. It is also the fastest starfish. It can move at a speed of 3m per min. and cover a distance of at least 3km. Over 15 000 ambulacral feet are used for movement. They are ended with suction cups that allow an animal to stick to the rocks. The body can have different colors, i.a. yellow, light orange and red to brown, and sometimes purple.

This animal leads a solitary life. It is a predator which uses a strong sense of smell and receptors that are very sensitive to light in order to gain prey. Its mouth is at the bottom of the body. It mainly feeds on sea urchins. This diet is supplemented with algae, sponges, mussels, snails, sea cucumbers, other starfish, crustaceans and fish. Diet varies depending on geographical location and food availability. By eating sea urchins, it regulates the structure of the bottom communities.

It is a gonochoric species, but there is no clear sexual dimorphism. Fertilization is external and random, individuals release gametes directly into the water. The larva is planktonic and feeds on phytoplankton. After a few weeks, it settles at the bottom and transforms into a young individual that feeds on plants. The young starfish has 5 arms. With age, more arms grow in pairs on both sides. Each new pair is inserted between the last pair created and the adjacent original arms. Juveniles fall prey to predators such as big fish, king crabs and otters.

When threatened, it may throw away a part of its body and move away from a danger.

It also releases a chemical substance into the water that alerts other individuals of the danger. After some time, the lost arm will grow back. If the detached arm had a fragment of the central body part, a completely new individual will grow out of it. This is a regeneration phenomenon. Regeneration is also a form of asexual reproduction in these animals.

In the years 2013–2015, the number of this species dropped due to the sea star wasting disease and the increased water temperature caused by global climate change. The species disappeared from habitats off the coast of California and Oregon, and its population decreased by 99.2% in waters near Washington State. In 2016, a team of environmentalists studying the area of 3,000 km found a decrease in the population of the Sunflower sea star by 80-100% compared to 2013.