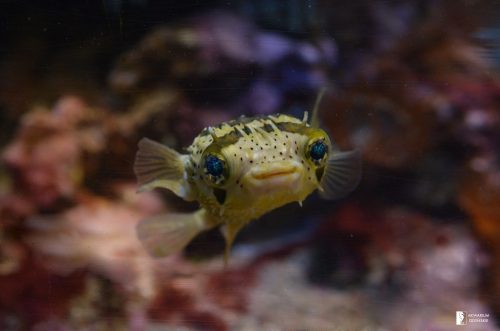 This species has a wide range of occurrence concentrated on tropical and subtropical waters. Its range in the Pacific Ocean covers coastal waters from California to Columbia, the Galapagos Islands, Hawaii, Easter Islands and the area from southern Japan to Lord Howe Island. In the Atlantic, it is found from Florida to Brazil, including the Bahamas, and also in the eastern Atlantic between 30 ° N and 23 ° S, including around South Africa. In addition, it occurs in the West Indian Ocean from the Red Sea to Madagascar, in Mauritius and the island of Reunion. Adults are associated with the bottom at a depth of 2 to 100 m. They prefer the bottom covered with vegetation, lagoons, coral and rocky reefs, as well as the dim bottom near the mangrove trees. Juveniles are pelagic. Unlike adults, which are loners, juveniles form large schools. When they reach a length of 7 cm, they change the habitat and descend near the bottom.

The Porcupine puffer is active during the night and hides during the day. It grows up to 50 cm long (usually 35 cm). Its characteristic feature is the presence of scales transformed into spikes that are used for defense and arranged along the body. This fish moves slowly using the pectoral, anal and dorsal fins, the caudal fin acts as a rudder. Her bright body is covered with large, dark spots located on the sides of the body and on the back, which dominate in the coloring of the fish. Between them, small black spots are visible, which, unlike D. hystrix, do not extend to the fins. The vertical brown stripe above and below each eye is characteristic. Juveniles are from olive to brown with dark spots, which is to mask them among the vegetation.

Thanks to its strong jaws and teeth, the Porcupine puffer specializes in eating hard invertebrates such as sea urchins, mussels and snails and crabs. Pocked teeth can catch and crush prey, while large, gummy lips protect against injury from spikes and broken crusts.

Puffers are dioecious (meaning the male and female reproductive organs are always present in separate individuals). Fertilization usually occurs at dawn or dusk. Then the male gently pushes the female towards the water surface. Fertilization is external. The eggs released by the female are immediately fertilized by the semen of even a few males. The larva is planktonic, parents do not take care of the offspring. The body of the larva is yellow with distributed red spots. Just 10 days after hatching, the spikes appear on the body of larvae. After three weeks, larvae transforms into a juvenile with an olive or brown body, characteristic of mature individuals. Despite the presence of spikes on her body, it is consumed by large predatory fish, primarily by tuna and dolphins. Mature individuals fall prey to sharks. Although other representatives of the puffers are used in Asian cuisine, D. holocanthus is not widely consumed. Dried and inflated, they are sold as souvenirs. They are also used in Asian folk medicine.

When the fish feels threatened, it pumps its body swallowing water. In this way, it gains a larger volume, additionally raises the spikes, which discourage predators from attacking. Its body coating is very flexible, allowing the body to expand by up to 40% from its original size. When the threat passes, excess water is excreted and the fish returns to normal size. In addition, this fish accumulates in its body a toxin – tetrodotoxin, which affects the nervous system.