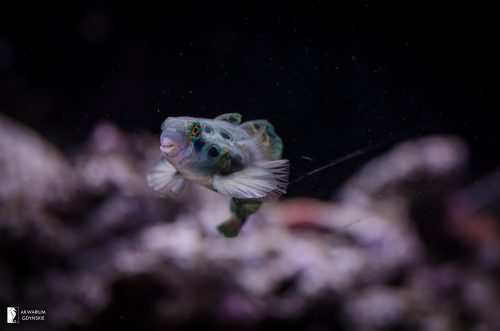 This species is found in the tropical waters of the Indo-West Pacific, from the Philippines and Eastern Indonesia to Northern Australia. It is a bottom fish associated with coral reefs. He prefers coastal reefs and shallow lagoons with a sandy base, where he settles on sand or rocks, most often among coral branches, where he finds food and shelter. Occurs to a depth of 20 meters. This slow and shy fish is most often found in small groups or in pairs. It reaches a small body size, with a maximum length of 7 cm. Males are slightly larger than females.

The Green spot mandarin is distinguished by its unusual and intense color. The body is light green or olive and is decorated with a combination of black, orange and blue spots. The first ray of the dorsal fin is elongated in the male. The mandarin skin is covered with a thick layer of mucus, which has an unpleasant smell and a bitter taste. Its task is to inhibit many types of parasitic infections and minimize the risk of infection after physical injury. There is also a layer of cells on the skin that produce and release substances with some toxins. It is suspected that this secretion is used as a repellent to predators and other fish. Also, most likely, its bright coloration is supposed to inform predators that it is poisonous. Mandarin feeds during the day. Its diet consists mainly of copepods. In addition, it feeds on algae, plankton and small benthic invertebrates. It is a dioecious fish. Fertilization occurs when the male and female swim close together. Eggs and larvae are pelagic. When the larva reaches the appropriate developmental stage it settles to the bottom. This species breeds successfully in captivity. Due to its attractive coloration, it is a valuable aquarium fish. Fishing for mandarins as aquarium fish plays an important role in the local economies of the Philippines and Indonesia.

The Green spot mandarin – is this an optical illusion like in the case of the Regal blue tang?

The Green spot mandarin is one of two species of vertebrate whose blue color is due to the presence of cyanophores in the skin. Cyanophores are dye cells containing a blue dye. Cyanophores are also present in another representative of the mandarins – Synchiropus splendidus (magnificent mandarin). In other fish, the blue color is structural in nature and is a light phenomenon in which light-reflecting pigment cells (isidophores) participate.