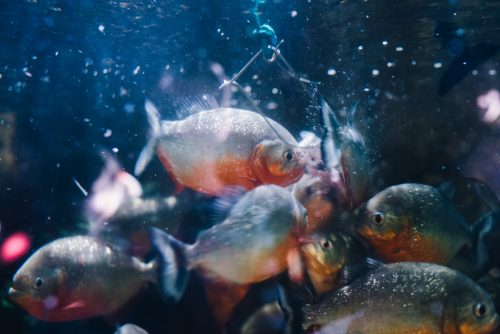 This species of freshwater fish is common in South America, where it occurs in the rivers of Argentina, Brazil, Bolivia, Colombia, Ecuador, Guyana, Paraguay, Peru, Uruguay and Venezuela. It lives in the warm waters of several major rivers, such as the Amazon, Paraguay, Parana and Essequibo, as well as in many smaller ones. It prefers rivers rich in mineral substances that give the water a white color, only sporadically seen in rivers with a very low pH and high content of humic and fulvic acids, whose waters are black. The Red piranha inhabits coves, floodplains, lakes, streams and large rivers, up to a depth of 20 meters.

It lives in groups of about 20-30 fish. Interestingly, they do not group to hunt for large victims collectively, but for protection against larger predators. However, provoked or starving, they can go into a feeding spree, then several groups of piranhas gather around the victim and eat it within a few minutes.

Such attacks are extremely rare. Despite the opinion of a dangerous predator, it is omnivorous. A typical diet of red piranha includes insects, molluscs, crustaceans and other fish, as well as plants and carrion. The feeding time varies depending on the size of the fish. Smaller fish search for food during the day, while larger ones feed at dawn and late afternoon and evening. Usually hunts waiting for prey hidden among the vegetation, but can also actively pursue prey. Its powerful teeth can cause serious bites.

The Red piranha is not a migratory species, but travels in search of conditions favorable for reproduction and spawning during periods of increased rainfall. It is a dioecious animal. The male can be distinguished from the female by the cross-sectional shape of the abdomen. In males it has the shape of the letter “V”, while in females “U”. In addition, the female belly has a slightly deeper shade of red. Piranha has two breeding seasons per year that are associated with water level fluctuations. When the individual is ready for sexual activity, it loses its red color and selects spawning habitat such as vegetation floodplains. This animal shows breeding behavior around nesting sites, then two different sexes swim side by side being in close contact with the abdominal sides. Initially, they were thought to be courtship, but this behavior was to defend the nest. The nests are about 4-5 cm deep, 15 cm in diameter and are dug among grass. The female lays up to 5000 eggs, which she sticks to the vegetation in the nest. After a few days of fertilization, how are young individuals hatching who seek shelter from predators among the vegetation. Juveniles will reach puberty after one year.

The Red piranha is considered one of the more dangerous and aggressive species of piranha, but it has developed a kind of symbiotic relationship with another piranha agent – Serrasalmus marginatus, which cleanses its body of parasites. It can be dangerous to people due to the risk of biting. It is the most commonly caught species of piranha used commercially as aquarium fish. Its fishing and trade as an aquarium animal can locally reduce the number of this species.

Fish and children don’t have a say – do they?

The Red piranhas can communicate with each other. Very often the issuing of sounds manifests itself along with aggressive behaviors, such as biting, racing or fighting. The sounds produced by piranhas are generated by muscle spasms and are associated with a swim bladder that serves as a resonator. When removed from the water, piranha makes a drumming-like sound. Three other types of sounds are made in the aquatic environment and vary in frequency and duration depending on the circumstances. They will be different when two individuals meet, before a fight or during a pursuit or just before a bite. Almost all sounds made by piranhas are produced in the context of social interaction. Low sound is usually produced during moderate attacks, while loud, high sounds are generated during more energetic attacks.