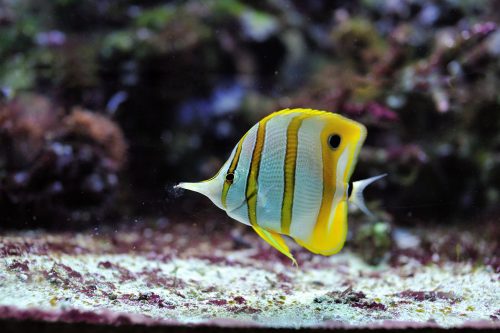 This species occurs from the Andaman Sea, through the Indo-Malay region, to Japan and the Great Barrier Reef in the Pacific Ocean. It inhabits coastal reefs, rocky shores and estuaries at depths from 1 to 25 m. The Copperband butterflyfish swims alone or in pairs. Juveniles are loners and inhabit shallow waters. It is an active fish, which swims freely, but also spends time hidden in cracks and crevices where it lies motionless. It is not aggressive, but will defend its territory against other representatives of the genus Chelmon. It reaches small dimensions, the maximum total length is 20 cm, while in captivity it is much smaller. The maximum reported age from the environment was 10 years, while in captivity it lives up to 4 years.

Its body has the shape of a shield with a long protruding muzzle ending with small snout. Its coloration is also characteristic, on the silvery-white body there are 4 vertical stripes in yellow or orange with black and white edges.

At the base of the dorsal fin is a false eye with a bluish-white circle. The dark eye of the fish is much smaller than the false eye.

Young individuals are similar to mature ones, only their false eye is larger in size and the stripes are more intense. It is a carnivore. It uses his long mouth to get food out of the cracks. Its diet is based on polychaetes, representatives of corals such as Aiptasia, molluscs and crustaceans. The Copperband butterflyfish is dioecious and monogamous. During spawning taking place just below the water surface, the female lays eggs, which are fertilized by the male. Fertilized eggs float along with currents in the water column. The larvae lead is planktonic.

Due to its attractive appearance, the pensetnik is a popular aquarium fish. Nevertheless, it is a fish that requires experience, because it is difficult to keep it alive in captivity. Individuals smaller than 14 cm are most often sold, juveniles not exceeding 3 cm in length are very rare. The Copperband butterflyfish is exported from the Philippines, Indonesia and Australia, while individuals caught in Australia are considered more adapted to life in captivity, which is why they achieve a double price. This is due to the methods of obtaining individuals from the natural environment.

Mimicry – a form of defense against predators.

The Copperband butterflyfish due to its small body size can easily fall victim to larger predators. Like other gentle fish, it has developed a false eye to mislead the opponent. The false eye, i.e. a colorful spot located on the dorsal fin, is a form of mimicry, i.e. similar to other dangerous animals. In the Copperband butterflyfish, the false eye, which is much larger than the real eye of the fish, is designed to mislead the predator as to the location of the fish’s head. In most cases, the predator attacks the head so that the victim has no chance of escape. If the predator considers the false eye, and thus the back of the fish’s body, as its head, such a fish has a chance to escape. A similar strategy is used by many species of marine fish, but also freshwater, such as the Oscar.