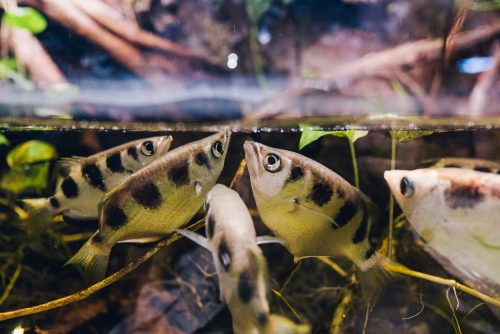 This species is found in Indo-Pacific waters, from India, through Southeast Asia, Indonesia, Philippines, New Guinea to Australia. It tolerates  changes in salinity, so it can be found in fresh, brackish and salt waters. However, it prefers the brackish waters of the mangrove forests, but also lives in small streams and rivers, as well as near vegetation on coral reefs.

It is a calm fish that lives in small flocks just below or near the surface of the water. If the fish is left without a group, it becomes aggressive towards other fish. The maximum length of the Banded archerfish’s body is 30 cm, however, they usually grow up to 25 cm. In captivity, they reach a smaller body size, about 16 cm and can live from 5 to 8 years, and sometimes even 10. Its body is oblong and raised from the back. The body is generally silver-white, although it may also be yellow. The back is green-olive or brown. The dorsal fin is yellow-green, the caudal fin is earthy green, and the anal fin is silver. On the sides of the body there are wide, black stripes (4 or 5), which shorten as the fish ages. Juveniles have a silver body with a yellow-green or brown back. The archerfish’s eyes are large and set so that he can look forward.

It is omnivorous, the basis of its diet are land insects, molluscs, crustaceans, small fish and plants. Actively hunts its prey by shooting insects on the vegetation above the water surface with a stream of water spewed from the mouth.

It is a dioecious, oviparous animal with external fertilization. The first reproduction occurs when the animal is 10 cm long. During spawning, which takes place in November and December, the female lays between 20,000 and 150,000 eggs, with fertility closely related to the size of the female. They rarely reproduce in captivity. They plays insignificant role in commercial fishing, but are also caught as an aquarium fish.

The archerfish can see a clear picture despite the different refractive index on the water-air interface. It does this through special adaptations in the eye with an extremely large retina on which the image focuses. This allows the fish to look through the water into the air without having to take into account the distortions in the spatial system, resulting from different refractive indexes, and give an accurate shot. Another possible way how a shooter deals with minimizing refractive indices is to position itself almost directly under its prey before the shot, then it sees the same picture he would see from the air.

The way it shoots its victim is also important, unfortunately it is not known in detail. It is known that a shooter is able to spit water by exerting pressure in the mouth. A stream of water is generated in a tube formed from the tongue hooked on the groove in the palate. Water is thrown out of the mouth by high pressure due to the contraction of the gill chamber. The length of the water stream shot by the fish can reach up to 3 meters.