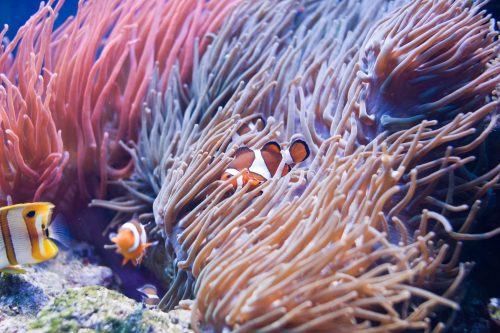 Certainly Andrew Stanton contributed to the promotion of this fish, seeking inspiration for his new work, looking for a picture that would embody the magic of the ocean. While viewing photos of marine fauna, he came across two individuals of the spotted clown who live in symbiosis with anemones in their natural environment, which makes them a grateful object for observation both at home and in many zoos.

When breeding clownfish, remember about sex variability. Within the herd, the largest and dominant individual becomes a female, and the next largest in size becomes male. Other fish persist in asexual form and stop their growth. Sex dimorphism is very pronounced in this fish. When the female dies, the mature male will change sex and become a female, and the next size individual matures sexually and becomes male. If in the breeding conditions a pair or several clownfish of the same size appears in the tank, the time is required for the emergence of the dominant individual due to competition in the group.

The female lays eggs in the chosen place, which are fertilized by the male. Spawning is associated with the phases of the moon and should take place about every 27 days. Mature couple in favorable conditions will spawn periodically every several days. The standard factor that stimulates fish to breed is high food quality, which should be diverse. Parents should not be separated from laid eggs because they remove impurities and aerate the eggs by fanning their fins, which protects them from mold. Adult fish should be left with eggs for as long as possible. The juveniles hatch after about a week and intensively feed. If an aquarist would like to control the hatching time to some extent, one can darken the aquarium, because in nature the hatching occurs after dark. Growth is very slow. Properly fed clownfish reach 3-4cm in size at 6-8 months of age. The success in raising young clowns lies in frequent but reasonable feeding with living food.

It is worth remembering to secure all filter inlets with a very fine plastic mesh or aquarium sponge so that increased water circulation does not lead to large losses in breeding. In larger aquariums (more than one species) other inhabitants of the tank can treat larvae and small fry as potential food.

The ocellaris clownfish is one of the best known species of the genus Amphiprion, thanks to the movie “Finding Nemo?” Clownfish live in close symbiosis with anemones. It has been proven that thanks to a certain ingredient in the clown’s mucus, it is protected against burns by anemones. If the fish moved away from the host, it could quickly become a victim of predators. For protection, clowns repay by keeping the coral in good condition.