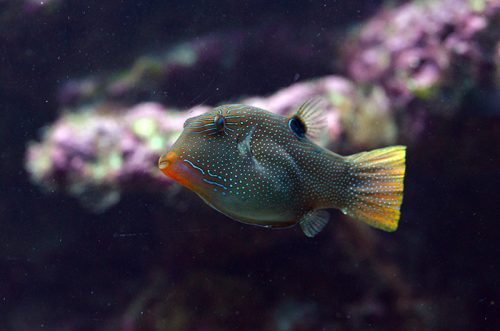 This species is found in the Indo-Pacific, from East Africa east to the Tuamotu Archipelago, north to the Ryukyu Islands, and south to New Caledonia and Tonga. Its presence has also been reported in Hawaii, but is not numerous. Populations from the Philippines, Indonesia, New Guinea, Queensland and Belau differ slightly in coloration. Species from the Pacific seem to be slightly darker compared to those in the Indian Ocean. Puffer inhabits a variety of habitats, including open sea areas, vegetated areas, lagoons, coral reefs and artificial reefs. Its depth range is 10 to 36 meters. Like the other representatives of the genus Canthigaster, it is rather small, it only grows up to 12 cm in length. It feeds mainly on thread-like algae, but also sponges, corals, tunicates, molluscs, echinoderms, polychaetes and crustaceans. It uses its four impressive, strong teeth for nutrition. Teeth grow all their lives, and to grate them, the Spotted sharpnose eats hard food. It is often seen in pairs, sometimes in small groups. It is an optional monogamist, which means that the male is forced to associate with one female due to the limited number of individuals. They are oviparous. Females build nests to lay their eggs in and look after them. This fish has an interesting coloration. Its body is greenish brown and is covered with many light blue spots and lines. Bright colors inform predators about its toxicity. It makes characteristic noises.

How does the puffer defend against predators?

The Spotted sharpnose creates a symbiotic relationship with the bacteria Pseudoalteromonas tetraodonis, which produce tetradotoxin – a potent neurotoxin. Fish accumulates the toxin in the skin, gonads and liver. The degree of animal toxicity depends on the geographical area and the season of the year. When it is stressed or dies, it releases a toxin into the water. Despite its toxicity, it is consumed by people, but it must be prepared in certified restaurants. Inappropriate preparation of the fish may result in the death of the person who consumed it. Another form of defense against predators is to increase in body size. When it feels threatened, it pumps water into its stomach, thereby increasing its volume, which in most cases discourages a predator which is unable to swallow it. An additional form of protection is the presence of a ‘false eye’ located at the dorsal fin. Its task is to confuse predators about the actual location of the fish head.