It is a species of fish with an unclear taxonomic system. In literature on fishkeeping it can go to under different names. These discrepancies arose because the same fish was described as a separate species or subspecies. It was treated as a subspecies of A. fasciatus, but is now a separate species. It inhabits inland waters of Mexico and Guatemala and two US states – Texas and New Mexico. Its range in the southern US is expanding due to its use as bait. Prefers rocky and sandy bottoms of streams and small and large rivers.  The form inhabiting underwater caves is found Only in Mexico.

A characteristic feature of the form living in darkness is the lack of eyes and loss of body pigmentation. Lack of sense of sight is compensated by sharp smell and hearing. The body length of an adult fish does not exceed 12 cm, on average it grows up to 7.5 cm.

Commonly, the fish has a gray body, but the cave form has a pink and white body. Its natural diet consists of crustaceans, insects and ringworms, while the cave form feeds on invertebrates, which it finds with a strongly sharpened sense of smell. The Blind cave tetra uses a sensitive lateral line to detect small changes in water pressure around it, enabling it to navigate and get food. When the animal is placed in a new environment containing objects that it does not recognize, it begins to swim at a higher speed. In this way, it increases the lateral line stimulation enabling it to obtain information about the environment faster.

It is known that this fish creates a detailed spatial map of its surroundings, which it remembers.

It is a dioecious animal, very fertile. The female can lay up to 1000 eggs. Dimorphism is evident in the appearance of the anal fin. In the male it has a slightly curved edge, while in the female it is straight. In caves, the fry develop eyes in the early stages of life, but they disappear at a later stage of development. Individuals with eyes can interbreed with those without eyes giving fertile offspring. This makes this species an excellent model organism for studying convergent and parallel evolution, regressive evolution in cave animals, and the genetic basis of regressive traits. The standard variety living near the surface is not popular among aquarists, unlike the cave form. Initially, all aquarium specimens had been obtained from the natural environment, but this fish breeds perfectly in captivity, which is why its main exporter is now Asia. Interestingly, these fish begin to develop a silvery gloss on their sides, which may be the beginning of artificial adaptation to breeding outside the underground environment. 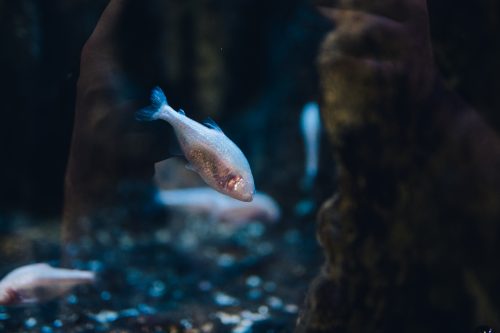 Due to the natural environmental conditions of this fish, it had to develop a number of metabolic adaptations to survive. In caves, it is difficult to have constant access to food, which is why it is important to accumulate reserves in the form of large amounts of fat and resistance to hunger. This fish shows symptoms typical of diabetes and non-alcoholic fatty liver disease, but there are no obvious health problems. The discovery of the genetic basis for adaptation to an extreme environment may lead to the development of new treatments for diabetes and other diseases. Scientists are focusing on changes in fish metabolism that allow them to go through very long periods without food. Large “supplies” of food occur most likely once a year during the flooding of caves. The Blind cave tetra feed then intensively and increase body fat, afterwards it uses stored fat as the next meal. To be able to increase fatness, allowing them to survive during a period of lack of food, they become insulin resistant. Biologists have identified a genetic mutation that is responsible for this resistance. Nevertheless, it will take a long time before the discovery of scientists will bring solutions for patients.