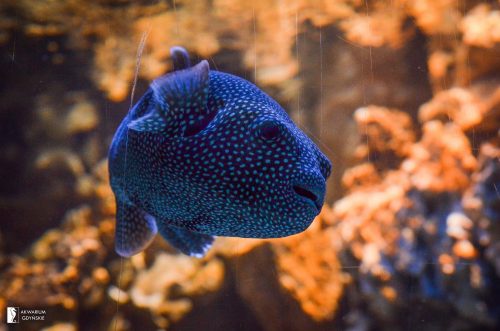 This species is widespread in tropical Indo-Pacific regions from East Africa east to Mexico and Ecuador, north to Ryukyu Islands and Ogasawara Islands south to Lord Howe and Easter Islands, as well as Christmas Island. It is most often found around oceanic islands. It is closely related to coral reefs, where it occurs in large numbers. It is less common on the rocky reefs of the Eastern Pacific. Occurs at depths from 1 to 73 m, however, it can usually be found at a depth of 3 to 24 m.

A mature individual can reach a maximum length of 50 cm and prefers a lonely lifestyle. This species has a strong, direct impact on coral communities. Due to its nutritional predisposition, it may limit the distribution and number of predatory corals. It feeds mainly on coral tops and to a lesser extent algae, bryozoans, foraminifers, tunicates, sponges, molluscs and detritus (dead organic particles). The massive four teeth resembling a beak support feeding.

Like other pufferfishes, its body is oval, almost round in cross-section, and the scales are transformed into small spikes resembling thick sandpaper. This species shows variable color, occurring in black and yellow forms. The dark variety is speckled with white spots, while the yellow variety has an almost uniform yellow coloration with individual black spots scattered throughout the body. It is a gonochoric, oviparous species.

This fish has developed a successful strategy of defense against predators. First of all, in case of danger, it fills its body with water, increasing its volume considerably, additionally tiny spikes covering its body become visible. Increasing body size is supposed to discourage the predator from attacking. Moreover, it produces neurotoxins, tetrodotoxin and saxitoxin. The black species variety is more toxic, with the highest concentration of toxins found in the liver, while the yellow variety is less toxic and accumulates toxins in the mucosa. The degree of toxicity also depends on the geographical area and season. Due to its toxicity, it is not caught for consumption, but it is used as a decorative aquarium fish. It can get high prices of up to USD 200 per individual, while individuals from the yellow variety are more valuable and can cost up to USD 500.

How do pufferfish swim?

Due to the shape of its body, this fish cannot move at high speed, also the movement of the tail is hindered. When moving at a low speed, the fish changes its angle with its head higher by about 10 ° and moves the dorsal, anal and pectoral fins. The caudal fin does not make any movements that affect the animal’s speed, it only acts as a rudder. Body shape is similar to shape at rest.When the animal begins to move faster, the anterior abdominal part flattens, the mouth is wide enough to see the teeth and the caudal fin is activated.