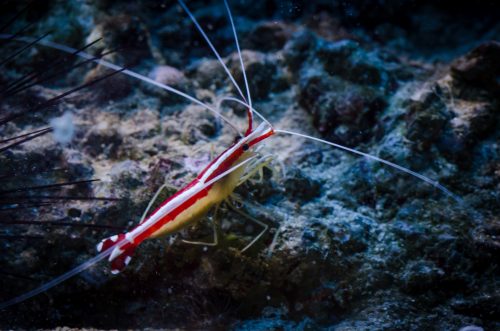 The species is widespread in the Indo-West Pacific from Kenya to Japan, French Polynesia and Hawaii. It is also found in the Red Sea. It is a natural part of the tropical coral reef ecosystem at a depth of 5 to 40 meters. Usually found in caves or on rock ledges. Cleaning shrimp does not form large groups, most often it is observed in pairs. Reaches a length of 5-6 cm. Its light yellow body has a characteristic coloration with two red stripes on the back with white one in between them. Long antennas are also white. This shrimp has 5 pairs of walking legs, the first of which is transformed into forceps, which are used for food and defense. Under the abdomen there are short legs for swimming and for supporting eggs as they develop. Although shrimp is considered an omnivorous species, most of its nutrients come from symbiotic relationship with fish that are cleaned of parasites and dead tissue. Both species benefit. The shrimp is provided a meal while the fish are free of parasites. Additionally, the cleaning services offered by the shrimp help in healing injured fish. The cleaner shrimp is often found in the company of moray eels that provide protection from predators. After reaching sexual maturity, all shrimps become males that after a few consecutive moultions (change to a larger exoskeleton due to the increase in the body size) become hermaphrodites. They can then function in relationships with other individuals both as male and female. This form of sexual maturation is unique to Lysmata shrimp. A pair of mature shrimps alternately change the moulting time. Fertilization occurs right after moulting, in which case the shrimp acting as the male fertilizes the other one acting as the female. As the next shrimp moults, the roles flip. During spawning, the female lays between 200 and 500 eggs, which it places under the abdomen and looks after until the larvae hatch. About 6 months after spawning, the juvenile organisms reach sexual maturity. It is popular in domestic and public aquariums due to interesting coloration and cleaning functions that apply to both tank and fish. They are also used for educational purposes, as they are released into touch tanks, where visitors can put their hand in to undergo a shrimp cleaning treatment.

The cleaning shrimps and fish gather in one place on the reef, at the so-called “cleaning station”. The cleaning station is visited by various species of fish, including those that can be a threat to cleaner shrimps because they eat shellfish similar in size. If a customer is a fish that does not pose a threat, the shrimp immediately goes to work. The situation is slightly different when a predatory fish arrives for the cleaning procedure. Then the cleaning shrimp must signal more clearly to the predator that it is its partner and not a victim. It performs a specific dance while moving sideways, intensely sways its legs and touches the fish with its antennae. When the predator shows no interest, it proceeds with cleaning work.