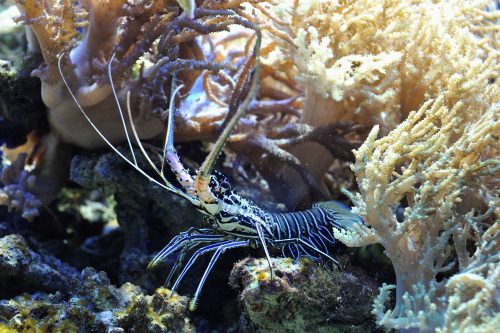 This crustacean occurs along the northeastern Atlantic coast, from Norway to Morocco and the Azores, and in the Mediterranean, except at its eastern extremities. It prefers a rocky bottom and a coral substrate, where there are many holes and small caves in which it can hide during the day. It lives only in clean waters – the presence of spiny lobsters indicates a low degree of environmental pollution. The depth range at which it can be observed is 5-200 meters, however, it usually stays at a depth of 10 to 70 meters. It can live alone, in pairs or small groups.

The Spiny lobster can reach a maximum length of 50 cm, however, it is usually 25-30 cm, and can reach a weight of up to several kg. The maximum verified age of this animal was 15 years. To increase body size, the animal sheds old armor, in its place a new, larger one is created. During moulting, the animal is vulnerable and may more easily fall prey to predators. The Spiny lobster’s exoskeleton consists of two parts covering the cephalothorax (fused head and body segments) and the body is finished with a telson (tail). It has a red-brown color, additionally there are symmetrical white spots on the abdomen and telson. The abdominal side is white, although sometimes brown, sandy and purple discolorations. The head is covered with spikes pointing forward. The antennas are very long and massive with orange and white stripes. The first of five pairs of legs is equipped with small claws, and the remaining 4 pairs with sharp single claw at each leg. There are also legs under the abdomen, they are much shorter and are used for swimming and supporting eggs by the female.

The Spiny lobster is a night predator. It is omnivorous and its diet changes depending on the number of benthic organisms present in the foraging area. It feeds on macroalgae, bryozoans, polychaetes, crustaceans and carrion, however, molluscs and sea urchins are the most important element of her diet. In addition to the daily feeding cycle, these animals also have a monthly cycle associated with moonlight. One should not go fishing for the lobsters during the full moon, because the most intensive foraging of lobsters is during the new moon.

The Spiny lobster is a dioecious animal. During the mating season, interesting behavior can be observed, when the animals move one after other in a string.

Reproduction occurs once a year from June to October, with larger females breeding first, smaller ones later. The fertilization is internal and immediately after it the female lays eggs, which she sticks under the abdomen and cares for them until the larvae hatch (phyllosoma stage), i.e. for about 6 months. The larvae are leaf-shaped and planktonic. After some time, the larva settles on the rocky bottom and transforms into a juvenile individual, which reaches sexual maturity at a length of about 7-8 cm. The Spiny lobster is commonly caught for consumption and is a culinary delicacy, mainly in the Mediterranean. Traditionally they are trapped or collected manually, but these techniques have been replaced with trammels (fishing gear).

Can a lobster sense a threat?

Yes, a lobster can avoid areas where it senses a threat. An experiment was carried out in which crawfish were admitted into the tank with the octopus Octopus vulgaris. The lobster showed chemosensory behavior in response to the smell of octopus. She was able to detect the predator’s odor among others and avoid the place where the octopus was.