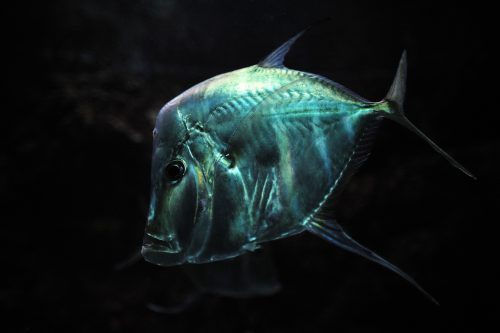 This fish inhabits the marine and brackish waters along the west Atlantic coast from Maine to Uruguay, including the Gulf of Mexico and Bermuda. It occurs in coastal waters with a hard or sandy bottom, at a depth of 1 to 53 meters. Juveniles prefer estuary areas or swim freely along sandy beaches. Selene is a pelagic fish, it actively swims in the depths of the water, but it can also be associated with the bottom. It can live in large shoals, in smaller groups or in pairs. It grows up to 50 cm in length, although the average length is 35 cm and weigh is over 2 kg. Due to its body shape and color, it is called a moon fish. Its body is tall and short, strongly flattened to the sides. The head profile is very steep and straight, angular at the top. The mouth is set low with the lower jaw sticking out and the eyes are high. Due to the location of its eyes, it keeps looking down when it is swimming in search of food. The body appears to be devoid of scales as they are very small, thin, transparent and embedded in the skin of the fish. The dorsal and anal fins have a characteristic appearance, in which the second ray is much longer than the others and gives the fin the shape of a scythe. Coloration is fairly uniform, usually silvery with a bluish tinge on the back. Sometimes it can also be aquamarine, turquoise or orange, and the edges are pale green-yellow. The juvenile has a few weak vertical stripes that disappear as it grows, and its first two fin rays are elongated and look like threads. Selene is a migratory predator that feeds on small benthic invertebrates, shrimps, small crabs and fish. It is a dioecious animal that is relatively poorly studied and little is known about its early developmental stages. The female lays eggs which are then fertilized by the male. After external fertilization, pelagic larvae hatch from the eggs. Selene does not look after offspring. It is not widely caught, but its meat tastes great. It is much more often wanted as an aquarium fish due to its interesting shape and attractive appearance.

How to effectively camouflage yourself in water?

Avoiding predators in the open ocean is difficult as there are no objects to hide behind. Then the silver surface of the fish plays an important role in the camouflage. The stealth system bends polarized sunlight on the animal. There are guanine crystals in the skin of selene, which have a high refractive index and reflect them by adjusting the light scattering to the angle of its incidence. Guanine crystals are arranged in the skin so as to coincide with the main axes of the fish, then regardless of the position of the animal in the water column, they will reflect the sun’s rays. This will make the fish invisible to predators. The skin of the fish is also silver for the human eye, but when we look at it under a microscope at higher magnification, it turns out to be a multicolored mosaic of yellow, orange, green and bluish-violet colors.