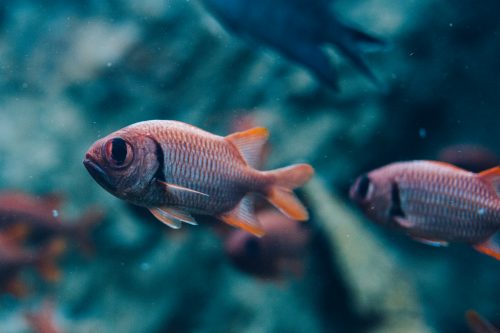 This species occurs in the tropical Indo-Pacific waters from the Red Sea and East Africa through Indonesia and Papua New Guinea to Samoa, north to the Marshall Islands, Taiwan and Ryukyu Islands and south to the east and west coasts of Australia. It inhabits coral reefs, both seas and lagoons. It is a fish associated with the bottom living near caves or rock crevices, where it can hide during the day. Most often it occurs to a depth of 10 meters, but it can also be found at a depth of 50 meters.

The Pinecone soldierfish can grow up to a maximum length of 60 cm, but the vast majority have a length of 18 to 25 cm. Its hallmark is red body color, large scales and large bulging eyes. The color may vary slightly between individuals from red to dark red with a dark band running from the top of the gill cover to the base of the pectoral fin, and the edges of the scales are reddish brown. The body is covered with chenoidal (comb-like) scales similar to a rectangle with comb-shaped teeth on the back edge. The scales have a rough surface, and there are also sharp protrusions on the body of the fish. Above the pupil is a large black spot, while below a smaller spot, which looks like a black vertical band passing through the center of the eye. The first pectoral fin on the spines and is usually folded along the body of the fish. It has a red color, like the other fins, but others have additional white leading rays. The second dorsal fin is soft and in shape and location corresponds to the anal fin.

The Pinecone soldierfish is active at night, then it feeds mainly on plankton, such as crab larvae. There are no obvious differences between males and females. It is oviparous, fertilization is external, and eggs and planktonic larvae. Juveniles reach sexual maturity after reaching an appropriate body length, which is 11 cm for females and 7 cm for males.

Due to the poor quality of the meat, they are not caught for consumption, but their appearance makes them interesting enough to be caught as aquarium fish.