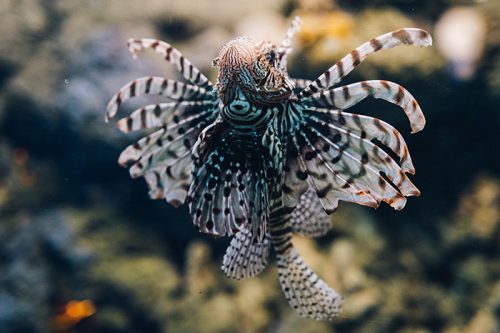 The Red lionfish inhabits the western Pacific, from southern Japan to Australia and the Philippines. Occurs on the hard bottom on the outskirts of reefs and lagoons. It can be found already at the water surface and at a depth of 175 meters. This fish lives about 10 years, reaching a body length of up to 30 cm. Its food are crustaceans and fish. The Red lionfish uses different strategies for obtaining food. Due to the fact that its swim bladder is surrounded by special muscles, it can control her level in the water column and change the center of gravity of the body so as to take a precise position before attacking the victim. In addition, it flushes invertebrates from the bottom using pectoral fins. Additional muscles around the swim bladder also allow it to turn upside down and freeze under the rock shelves, where it waits for the victim. It is mainly active at night and usually hides during the day.

After eating a large meal, its stomach can increase up to 30-fold, thanks to which it is able to fast for several weeks.

It leads a solitary life. Schools of up to 8 individuals gather only for breeding purposes. The female can lay up to 15,000 eggs, and its pelagic larvae can travel long distances, e.g. eggs laid in the Bahamas can reach New England along with the Gulf Stream. It has a characteristic white-red-black coloration that adapts to the surroundings. The bright stripes on her body signify that it’s dangerous. At the base of each stiff ray of its fins is a gland with a venom, except for the caudal fin. The venom contains neurotoxin, which, if pricked, can lead to death. It is a commercial species. It is consumed after removing the fins with the poison, the meat is a delicacy.

The Red lionfish as an invasive species

It is the only alien species that managed to survive in the waters of the West Atlantic. Adult lionfish occur along the east coast of the USA from Cape Hatteras in North Carolina to Florida, Bermuda, Bahamas and the entire Caribbean, as well as in the Gulf of Mexico. Its expansion began in 1985 in Florida, most likely it was thrown into the ocean from a home aquarium. Currently, the highest density of P. volitans has been observed in the Bahamas. Its numbers are several times higher than in its natural environment. In this area it was observed at a depth of 300 meters. Its body length is greater than that of individuals from the natural environment and reaches up to 50 cm. Its food consists mainly of fish, which are also food for economically important species of Atlantic fish. Another problem is the fact that it is more voracious than native predators of similar size. One Red lionfish can eat more than 20 young fish in just half an hour, very often eating the juvenile forms of important species of reef fish, such as parrotfish, which is responsible for maintaining the proper functioning of coral reefs. The Red lionfish has all the features necessary for the successful colonization of new areas. It is characterized by high competitive ability, low susceptibility to parasites, high reproductive rates, rapid growth, effective food acquisition, the presence of venom spines protecting it from predators and adaptation to any habitat.