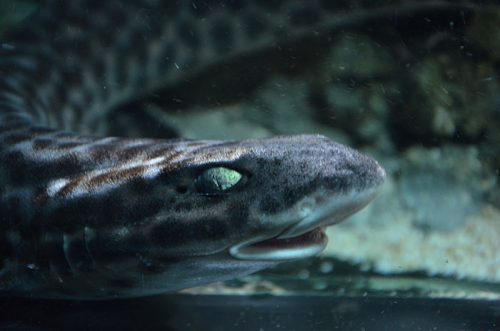 It is a poorly known endemic species of northwestern Australia, inhabiting coastal areas from Port Hedland in the west to Melville Island in the north. It lives in shallow waters up to 4 meters deep, although it can also be found at greater depths. It is closely associated with the bottom. It prefers a sandy bottom or covered with rocks, among which it looks for shelter. This is one of the smaller sharks, the maximum total length of his body is 60 cm. Its diet includes polychaetes, molluscs, crustaceans and small fish. It has a rounded muzzle, and its slender, brown body is covered with wide, gray stripes separated from each other by light areas. Very often the dark areas are outlined with numerous black dots that can merge and form an irregular line. Juveniles have a simpler pattern, only with broad dark stripes. It has no commercial value. As it is associated with the bottom habitat, it is not caught as a by-catch in commercial fishing.

What does reproduction of the marbled shark look like?

This question will be answered by our aquarists who deal with these sharks on a daily basis. It is our pride that the marbled shark successfully breed in the Gdynia Aquarium. Below we present the backstage of courtship and efforts of aquarists to ensure that the incubation of the embryo in the egg proceeds correctly.

The courtship and fertilization take place in the exhibition tanks. Courtship is very violent and looks almost brutal. The male chases his partner, bites her and tries to knock her over.

„This pursuit can be observed during the day, but the act of fertilization itself takes place at night. During the reproductive cycle, the female lays 2 eggs daily. We harvest the newly laid eggs and transfer them to breeding tanks in which conditions are suitable for their incubation. The tanks have special racks to which we attach eggs with their tacking barbles. It is also important that water flows around the eggs, as it washes and oxygenates them at the same time. After about 50 days, the eggs are gently “unsealed”, then the embryo is no longer tightly closed in its shell. Thanks to this unsealing, it lives and functions in the water that surrounds it (therefore it is vital to regularly replace water!). Incubation lasts about 90-100 days. At the end of the incubation period, the young shark ceases to fit in its shelter. The capsule is drilled and bitten. If it won’t be able to get out of the egg, it may end in death for small shark, so it’s important to watch it closely at this time. Often the young hatch with the remains of the yolk sac attached to the abdomen, which will be absorbed within a few days. During hatching, young marbled sharks are about 10 cm long. We transfer the newly born individuals to another tank. Each litter has its own tank, thanks to which we avoid situations in which older and stronger individuals would steal food from younger and weaker ones. We begin feeding attempts by giving them zooplanktonic animals, first living, then frozen. The next step is to try to give them clams, shrimps and chopped fish. The juveniles have special hiding places in their tanks. As a secretive species they need this kind of places.”