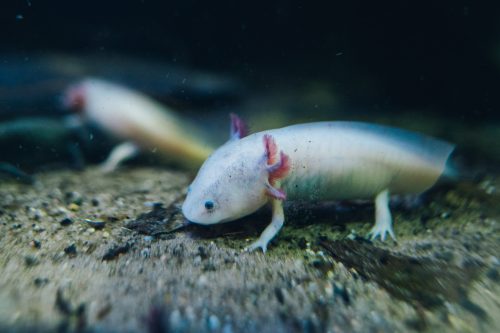 The axolotl is an endemic species (i.e., that it is unique to a site or region and does not naturally occur outside of it) to the freshwater waters of Lake Xochimilco, located south of Mexico City. Previously, this species was also found in Lake Chalco, but it was practically completely dried to prevent periodic flooding. Thus, the natural range of the axolotl was limited only to water channels with an area of about 40 km². This does not mean, however, that it can be found in Lake Xochimilco, because its environmental requirements are high, and the progressive environmental degradation and water pollution are not conducive to its development.

This animal prefers clean, well-oxygenated, cold waters with a sandy bottom abundantly covered with vegetation. It mainly leads a nocturnal lifestyle, and during the day it most often stays close to the bottom, where it looks for a hideout. This amphibian grows up to about 30 cm in length, and the average life expectancy is 10 years, although there are also specimens that live up to 25 years. The axolotl spends all its life in the larval stage. This is due to the low functionality of the thyroid gland, which is responsible for the production of the hormone (thyroxine) responsible for the transformation into the terrestrial form.

On both sides of the flat head there are 3 pairs of branched external gills, which are typical of the larval forms of amphibians. Its appearance is characterized by a wide mouth, thanks to which the animal looks eternally smiling, and small, black eyes. Its body is massive, flattened on the back and ends with a massive tail with a tall caudal fin. The limbs are short and delicate. In the wild, its body is dark gray or brown in color with numerous dark spots. Breeding forms show a greater variety of coloration. From practically transparent, through white, white-pink, beige, golden, copper, through various shades of gray to brown. An axolotl is a predator with rudimentary teeth that locates its prey by its sense of smell. It feeds at dusk on small aquatic animals that fit in its mouth. His menu includes, among others molluscs, insects, crustaceans and small fish. It can also eat other members of its species. When the density of individuals is too high, they bite each other, biting off legs and tails, but due to the high regenerative capacity of these animals, the limbs grow back.

The axolotl is a dioecious species. The male and female can be distinguished by the appearance of the cloaca. There is a bulge in the male near the cloaca, while in the female it is flattened. Despite the fact that axolotls remain in a larval form throughout their life, they reach sexual maturity and are capable of reproduction (neotenia). Breeding is preceded by matings, which consist in poking the cloaca area of ​​the opposite sex, making the animals move in a circle, which looks like a waltz. The male then moves away, undulating with his back and tail, resembling a hula dance, and the female follows him. The male lays the spermatophore (a bundle of sperm surrounded by a sheath), which the female then collects into her cloaca. A few weeks after fertilization, the female lays gelatinous squawk that it sticks to the plants with its hind legs. It can contain from 100 to 800 eggs, of which, after about two weeks, larvae less than 2 cm long hatch. After about a year and a half, the young reach sexual maturity. In their natural environment, axolotls were the leading predators until the water bodies were enriched with large predatory fish that feed on these amphibians. In the past, they were also eaten by local people and generally available for purchase at fairs, but due to the degradation of their natural environment and the drastically declining population, they have been legally protected, and selling them is prohibited. In the Red List of Threatened Species, the axolotl has the status of an extremely endangered species. Since 1975, it is also on the II list of the Washington CITES Convention on international trade in endangered species of wild animals and plants. In order to prevent further changes in their natural environment, also the remnant of the once large Lake Xochimilco was inscribed on the UNESCO World Heritage List in 1987. Despite these efforts, the population of the axolotl in nature is still very low. In 2008, their estimated number was 100 individuals per km², but it is still significantly decreasing. In 2013, only 2 individuals were caught.

The use of the Mexican axolotl in medicine

The axolotl can regenerate a bitten off limb, gills, tail, and internal organs such as the heart and brain. It can also regenerate a damaged spinal cord. This gives hope to use it as a preclinical model in regenerative medicine and integrative biology. This can help patients with diseases of the central and peripheral nervous system. In addition to their high ability to regenerate tissues, these amphibians show remarkable resistance to cancer. Using it as a model organism offers a unique opportunity to research cancer and discover anti-cancer drugs and mechanisms responsible for controlled cell growth and regeneration. Overall, the axolotl is an important research animal used in research in the fields of transplantation, gene expression regulation, embryology, neurobiology and regeneration.

Axolotls have been bred since the 19th century. Due to their form of life and high regenerative abilities, they have become the focus of research. In 1917, the Polish researcher Laura Kaufmann, by administering thyroid hormone to ambystomas, transformed them into a land form. During the transformation, the appearance of these animals changes, the external gills and caudal fin gradually disappear, and the end of the tail becomes rounded.