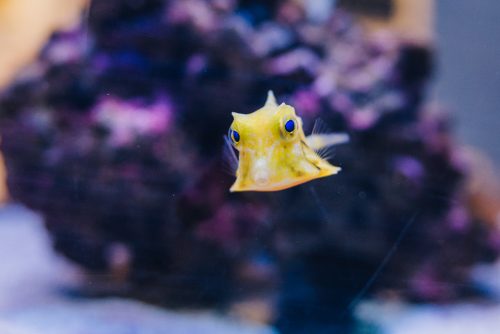 While Tetraodontiformes use many different defense mechanisms, Ostraciidae are characterized by armor composed of polygonal bone plates, which gives them a characteristic box-like shape. Due to its rigidity, it hinders the velocity of move, but protects them from predators.

The Longhorn cowfish is found near the Indo-Pacific coral reefs, from South Africa through Indonesia, the Marquesas Islands to southern Japan. It occurs at a depth of 1 to 100 meters. This fish survives over a dozen years and reaches a length of 40 cm, although it can grow up to 50 cm. Its diet is mainly composed of bottom invertebrates. Adults are loners, while adolescents form small groups. They have a yellow or olive body covered with turquoise spots. The caudal fin grows throughout their life, sometimes reaching as much as 2/3 of the body length, but it does not have a drive function, but rather acts as a rudder.

The characteristic feature of the Longhorn cowfish is four horns. Two grow out of the head and are directed forward, while the other two grow near the anal fin and are directed backwards. Supposedly, the horns are an additional defense mechanism discouraging predators from swallowing it. This can be confirmed by the fact that broken horns have an ability to regenerate, they grow back in a few months. In addition, when the fish is hurt or feels threatened, it releases a toxin (ostracitoxin) which repels predators. In such a case, if any animals are found in a limited space, it is deadly for them, including the fish itself.