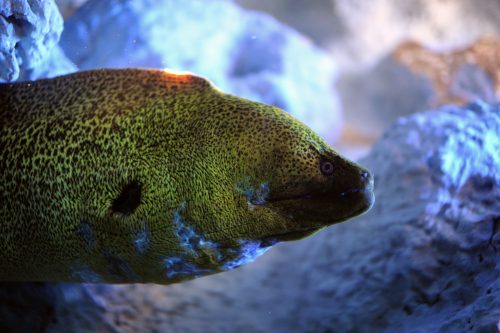 Moray eels are almost exclusively marine fish. Only a few species are regularly observed in brackish waters, in mangroves or in rivers, among them, for example, Gymnothorax polyuranodon. Moray eels occur in tropical and subtropical waters, with the greatest diversity found in tropical waters of the Indo-Pacific. Only a few species occur in the temperate zone, incl. the Californian moray (Gymnothorax mordax) and the Yellow moray (Gymnothorax prasinus). Many moray species inhabit shallow waters with bottoms covered in rocks or coral reefs, where they hide in holes and crevices. Others live on sandy or silty bottoms up to 500 meters deep. Many species are active at night and spend the day in hiding places.

These animals reach a length of 20 cm to almost 3.75 m, although most of them have a total length of just over 1 m. The largest species reach a weight of up to 30 kg. The body of moray eels is elongated, muscular, laterally flattened and devoid of scales, and their smooth skin is covered with protective mucus. Additionally, the lack of pectoral and abdominal fins (in most species) gives them the appearance of a snake. Moray eels have a thicker skin than other eel species, which, combined with the high density of goblet cells (mucus-producing cells), allows mucus to be produced faster. This is important for sand-dwelling moray eels, because the mucilage makes the sand granules stick to the walls of the burrows and they are more durable. This makes it easier for the moray eel to breathe freely, which is not easy considering the size and location of the gill opening.

Moray eels exhibit a stunning variety of color patterns, from solid brown or green to complex patterns of spots, stripes, mesh, and rosettes, ranging in colors from red to yellow and green and brown to white. In some species, the inside of the mouth is also patterned. Their jaws are wide and surround a protruding snout. Most of them have large, pointed teeth that are used for tearing meat apart or grabbing slippery food. A relatively small number of species, such as the Snowy moray (Echidna nebulosa) and Zebra moray (Gymnomuraena zebra), feed mainly on crustaceans and other hard-shelled animals and have blunt, molar-like crushing teeth. Their large jaws are set wide open, usually just beyond the back of the eye, which is well developed. Due to the fact that the eyes are small, moray eels rely mainly on their highly developed sense of smell. Moray eels have two pairs of nostrils. The front nostrils are tubular in shape and are located near the tip of the mouth. The posterior nostrils lie below or above the eye and look like a tube or dimple. The combination of a raised head profile, the position of the posterior nostril, the absence of pectoral fins, and a reduced lateral line is not found in any other fish family.

Moray eels are nocturnal predators that hunt crabs, prawns, cuttlefish, squid, octopus, and fish. They can also feed on carrion. Few predators prey on moray eels, incl. barracudas and sea snakes, which is why many moray eels, especially the larger ones, are the apex predators in their ecosystems. They are dioecious animals, although in some species all juveniles are male and only change sex over time. Fertilization is external and the eggs and larvae are pelagic. Moray eels have a leptocephalus stage, which is characterized by a glassy, ​​laterally flattened, high and elongated ribbon-like body. It is somewhat reminiscent of a willow leaf. Since leptocephalus has neither red blood cells nor hemoglobin in their blood, their body is translucent.

Several species of moray eels are popular with aquarists for their hardiness and flexible diet. The most popular are the Snow moray, Zebra moray, and Goldtail moray (Gymnothorax miliaris). In addition, they are eaten in many parts of the world, but there are risks.

Ingestion of moray eels weighing more than 4 kg can lead to ciguatera toxin poisoning, which is sometimes fatal.

The Giant moray (Gymnothorax javanicus) and Yellow-bank moray (G. flavimarginatus) are known to accumulate large amounts of ciguatoxins, which are mainly concentrated in the liver. A special case was the poisoning of 57 people who ate the head and half of the body of the cooked yellow-bank moray. It took place in the Northern Mariana Islands. Ciguatoxin poisoning is characterized by neurological, digestive and circulatory problems. Therefore, these fish are not recommended for consumption.

Given the great variety and variability among moray eels, they are difficult to identify. Identification is made on the basis of many features, including fin positions, tail length, anus position, nostril profile, jaws and dentition, and color pattern. Both the color pattern and dentition can change significantly as an animal grows, and the presence of fins is sometimes difficult to determine.

Moray eel – the prototype of the ‘Alien’? 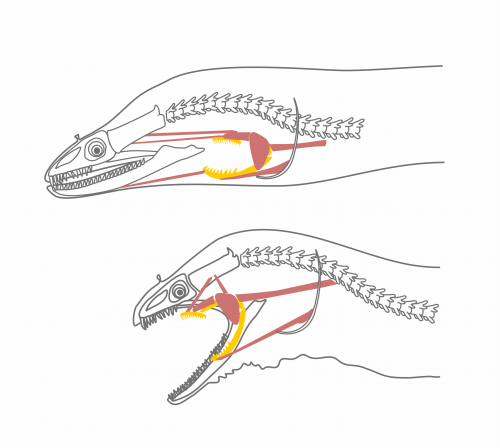 Moray eels have well-developed pharyngeal jaws, which are deeper in the body of the fish and resemble the jaws of the mouth. However, they have much smaller teeth. While feeding, the moray eels extend these jaws into the mouth, where they grab the victim and transport it to the esophagus. They are the only animals known to use the throat jaws to actively capture and restrain prey in this way. In the Californian moray, the teeth are able to fold as the victim shifts backward, thus preventing the teeth from breaking and keeping the victim during transport to the throat. Moreover, in order to avoid the escape of the captured victim, the moray eel’s mouth extends far into the head. Thanks to this, when throwing at the prey, the water flows out of the back of the mouth and does not displace the prey.