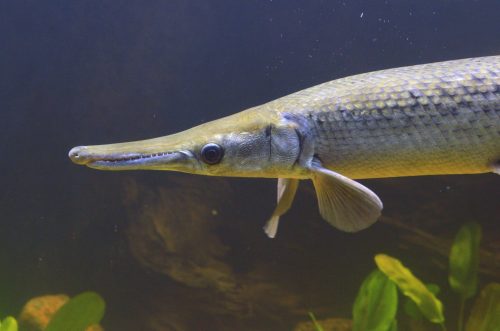 The Aligator gar looks like something between a pike and a crocodile: a lengthened trunk with three fins in the tail part refers to a pike, and long, toothed jaws are associated with a crocodile. The Aligator gars do not take care of their offspring. They are the largest freshwater fish in North America and may exceed the length of 3 m and the weight of 100 kg. They hunt for large prey, not only for other fish, but also for lizards, snakes and turtles.

It is one of the most primitive and the largest freshwater fish species in the world. Fossils from the Cretaceous period (145-66 million years ago) have been found in America, Europe and Asia. Currently, their natural environment are lakes, rivers and reservoirs in central and northern America, however, their number is constantly decreasing due to overfishing and dams, which prevent reproduction. They reach huge sizes, grow up to 200 cm on average and the largest specimen caught was 305 cm in length and weighed 166 kg. They can live up to 50 years. From time to time, the fish is observed to swim under the surface of water to get extra air, which makes it easier to survive in a low oxygen environment. It is possible thanks to the vascularized bladder connected to the pharynx. Female may deposit 138,000 eggs at a time. The eggs are bright orange and unfit for consumption, as they are poisonous. The Alligator gar has two rows of teeth and the internal row is longer. This feature allows to catch and effectively hold the victim in the mortal grip of strong jaws.