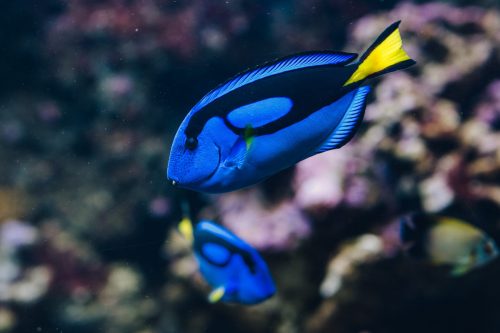 The only representative of the genus Paracanthurus.

The Blue surgeonfish is found in the coastal waters of the Indo-Pacific Ocean, from the coasts of East Africa to Oceania, excluding the Red Sea. It has a wide extent of occurrence, but is not common. We can meet it, among others, on the coral reefs of the Philippines, Indonesia, Japan, Australia, New Caledonia, Samoa, as well as Sri Lanka. It is associated with coral reefs, it lives mainly near their outer parts, where sea currents are stronger. The extent of occurance is related to its love of swimming. It inhabits coastal waters with a bottom covered with vegetation. It can be observed at depths from 1 to 40 meters. Its maximum length is 31 cm, but they usually grow up to 20 cm. It can live up to 30 years in the wild, and 8 to 20 years in captivity. Its food is comprised mainly of zooplankton and algae. Juveniles feed exclusively on plankton. It is a very important inhabitant of the reefs, because he cleanses corals of algae growing on them, thus keeping them in good condition. Most often, this species lives in pairs or form small groups of 8 to 14 animals.

Its characteristic feature is its coloration, blue body with black back and yellow fins. The attractive colors makes it a popular aquarium fish. Until recently, all individuals that we could admire in aquariums were caught directly from their natural environment. Currently, this species is successfully propagated in laboratory conditions, but not on a global scale. The larvae differ significantly in color from adults. Their body is almost transparent and silvery. It gradually turns blue, yellow pigmentation appears at the very end of development. At night its blue color pales, presumably avoiding the attack of nocturnal predators. Another characteristic feature of the Blue surgeonfish is the presence of sharp, poisonous spikes located on the tail, one on each side, which are used for defense. It is not of great commercial importance, but it can account for a significant proportion of inshore fisheries.

Its meat has an unpleasant smell and is poisonous. After ingesting it, the symptoms of food poisoning may occur.

This surgeonfish does not produce a toxin (ciguatoxin) by itself. It is accumulated in its body along with the consumed algae that produce toxin.

Why is it blue?

The fish do not have blue pigment in their skin. The blue color that we can see is nothing but a light phenomenon. Isidophores, i.e. pigment cells that reflect light, are responsible for this phenomenon. In the light they create iridescent colors, but by proper orientation of the schematochromes (prism-like structures, refracting and dispersing visible light to the surroundings,) and using biochromes (biological pigments) as a filter, they create a blue color.