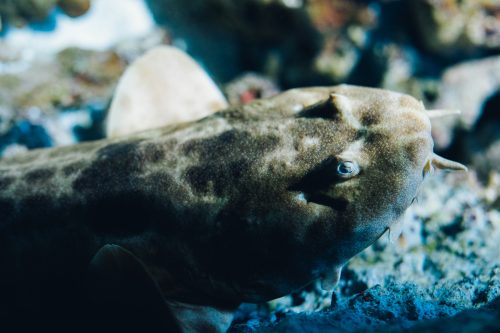 The Northern Wobbegong is a representative of cartilaginous fish inhabiting the waters of the Western Pacific Ocean surrounding the northern part of Australia from Queensland through the Northern Territory to Western Australia. It is associated with coral reefs, where it is most often found at shallow depths of 1 to 3 meters, frequently in places with turbid water. Sometimes it is also found at a depth of up to 40 m.

It leads a night life and reaches a small body size. Its total length is at least 63 cm, and individuals up to 1 m in length are also found. Its body is flattened due to its way of life, where it spends most of its time lying on the bottom. There are also characteristic growths on the head, resembling a beard, which are used to attract the victim as well as for camouflage. The very name ‘wobbegong’, derived from the Aboriginal language, means “shaggy beard” and it refers precisely to the appendages around a shark’s mouth. The colors of his body vary, but are mainly based on shades of brown. Rounded dark spots with light outlines interspersed with wide dark areas and several large dark spots (saddles) are visible on the back. Their coloration is ensured by an excellent camouflage, which is additionally supported by the ability to change the color of the body within a few days.

Despite the fact that this animal lives in shallow waters, it is still poorly understood. Presumably it feeds on benthic invertebrates and fish, but its diet is still unknown.

What is certain is that it is an ambush predator that uses its camouflage to hide among rocks and reefs and catch smaller fish that come too close. 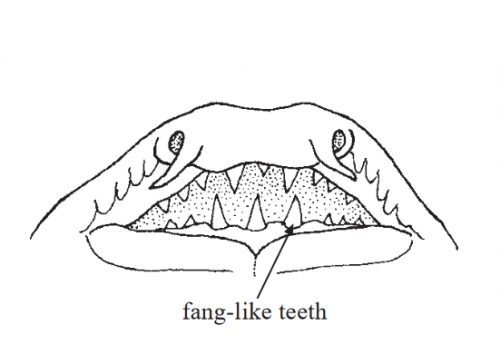 During attack, the wobeggong sucks prey into its mouth, where it is hooked on sharp teeth. It has two rows of enlarged canine-like teeth in the upper jaw and three in the lower jaw. Scuba divers have also observed a different way of hunting, where a shark creeps up on it. Due to their slow metabolism, they do not need to eat as often as other sharks.

It is a dioecious and oviparous fish reaching sexual maturity with a total length of 45 cm. The female lays eggs that remain in her body, but are not connected to it in any way. The embryos get their nutrients only from the yolk. The number of laid eggs is unusual. Litters count 20 individuals and more. After hatching from the egg, a young, fully developed individual leaves the female’s body. Wobbegongs are used in Australia in the catering industry as a meat ingredient in “fish and fries”. Patterned leather is also used for the production of leather goods.

How does a wobbegong breathe?

Carpet sharks breathe differently than deepwater sharks, which swim with their mouths open, thus ensuring a continuous flow of oxygenated water through their gills. Due to the sedentary lifestyle of wobbegons and the location of their mouths on the underside of the body, taking oxygenated water through their mouths would also involve taking sand from the bottom. Consequently, the carpet shark breathes through its spiracles, which are of considerable size and just behind the eyes. They are more visible than the eyes, thus protecting them against attacks by other animals.