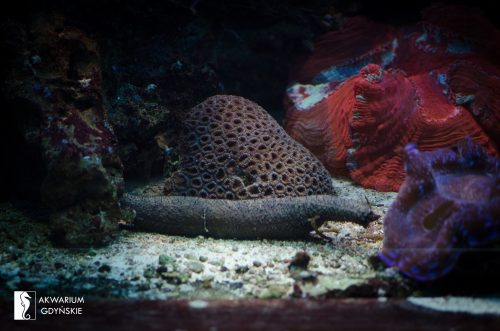 At first glance, the sea cucumbers are not reminiscent of other representatives of the echinoderms, whose characteristic five-ray symmetry is lost in sea cucumbers to varying degrees. In some species central symmetry is visible through five “rays” extending from the mouth to the anus. In these rays pseudopodia (ambulacral legs) are located, i.e. the endings of the water system, which serve for locomotion, food tracking and attach an animal to the surface.

Due to their body shape, they are called sea cucumbers, although the shape may vary depending on the species from almost circular, through a sausage-like or serpentine caterpillar.

They usually measure from 10 to 30 cm, but in extreme cases they are a few mm or over 3 m long. They do not have an outer skeleton, instead they have calcified structures reduced to microscopic cubes connected with connective tissue just under the skin. In some species these structures may have the form of flattened plates forming armor, while in some species the internal skeleton does not occur at all, e.g. in Palagothuria natatrix. Collagen tissues are also built into the body, which can change their mechanical properties, thanks to which the animal, by softening them, can squeeze through a small gap. However, to ensure safety, collagen fibers are shortened, then the body becomes firmer. This process is controlled by the nervous system and coordinated with muscle activity.

These animals are associated with the seabed and are spread all over the world, but most of them occur in the Asia-Pacific region. It is estimated that among the 7 orders, containing 30 families, there are 1717 species of the sea cucumbers. Many of them are collected for human consumption. They play a useful role in the marine ecosystem because they help clean the bottom of decaying organic residues and fertilize bottom sediment. They form flocks that move across the bottom in search of food.

Their mouth is surrounded by a crown of 8-30 tentacles, which can be straight, feathered, branched or branched and are used for feeding. The tentacles are modified ambulacral feet that can be hidden inside the mouth. Their appearance is one of the ways to identify particular orders. Identification of various species is also based on the appearance of limestone cubes embedded in the body walls. A significant part of the skeleton is a ring formed of ten limestone plaques surrounding the larynx. It is the attachment for the muscles that hide the tentacles, as well as for the main muscles of the body wall. Their digestive system is very simple. Many species have the esophagus and stomach, but for some, the throat opens directly into the intestine, which is usually long, curled, and passes through the body three times before it ends in the cloaca or directly as a rectum.

Sea cucumbers do not have distinct sense organs, despite the fact that various nerve endings are scattered on the skin providing sensitivity, also to the presence of light. There are also tree-shaped breathing channels that open into the cloaca. To breathe, an animal draws water with oxygen through the anus and then expels it. Together with the intestines, they also act as excretory organs.

In addition to the water system responsible for the movement of the ambulacral feet, they have a blood circulatory system.

The blood vessels are connected by over 100 small muscle ampoules that act as miniature hearts.

Due to the presence of white blood cells containing hemoglobin, their blood is red. Sea cucumbers are found in large quantities on the deep seabed, where they often make up the majority of animal biomass. They are the best adapted echinoderms to extreme depths. They vary greatly even at depths exceeding 5000 m. Moreover, at depths exceeding 9 km they account for 90% of the total biomass of macrofauna. The body of some deep-sea species, such as Enypniastes eximia, Peniagone leander and Paelopatides confundens, is built of hard, gelatinous tissue with unique properties that allow animals to control their own buoyancy, allowing them to move across the ocean floor, float or swim actively. Additional appendages on the body, e.g. resembling an umbrella, help them in swimming. Only one species, Pelagothuria natatrix, is typically pelagic because it never approaches the bottom. Sea cucumbers are scavengers. Their diet consists of plankton and decaying organic matter. In search of food, they sift the bottom sediment with the help of tentacles surrounding the mouth. 40 animals per square meter can process 19 kg of sludge per year. Some animals expose their tentacles towards sea currents and grab food directly from the water. The shape of the tentacles is adapted to the diet and size of the particles consumed.

Mostly they are gonochoric species, with the reproductive system consisting of a single gonada which opens at the dorsal side of the animal, close to the mouth. Most sea cucumbers reproduce by releasing semen and ova directly into the water. In some species, e.g. Pseudocnella insolens, internal fertilization occurs. The fertilized zygote is transferred with one of the tentacles to a pocket located on the body of an adult, where it develops and eventually hatches as a young sea cucumber. It is known that several species give birth to their young in the body cavity through a small crack in the body wall near the anus.

Many small animals can live in symbiosis with sea cucumbers. Some cleaning shrimps, in particular Periclimenes imperator, live on the body of sea cucumbers. Also, pearlfish is a commensal of cucumbers.

Fry hides in a sea cucumber cloaka, which becomes a shelter from predators, in addition, the nutrients found in the cloaka are the source of nutrtion.

In case of danger, they remove part of their internal organs through the anus, including sticky tubules, which are food for the predator.

Sometimes the removal of internal organs is also accompanied by the release of poison outside, which can kill other animals nearby. Removed internal organs regenerate within a few weeks.

Sea cucumbers play an important commercial role. They are consumed by people in various forms. They are also widely used in folk medicine, as well as in the pharmaceutical industry for the production of cosmetics and medicines, including those for joints. It is suggested that sea cucumbers can be used to treat cancer and malaria. Unfortunately, due to the high use of these animals, they are caught, both legally and illegally. They are also increasingly grown in aquaculture. Their popularity as luxury seafood in East Asian countries poses a serious threat to their population.