Listen to the stories about the sea animals…

Understanding the ocean is more than just a matter of curiosity. We have only one ocean that provides food, jobs and supports the economies of countries, is a source of inspiration, recreation and discovery, and an important element in the heritage of many cultures. The ocean is a beautiful and rich world, so it must be protected! Below you can read or listen to information on selected species present or discussed at the Gdynia Aquarium exhibitions. 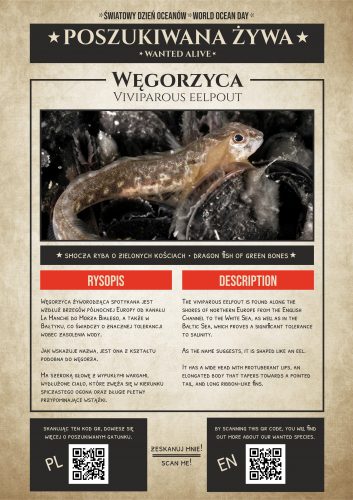 A small number of fish, including some sharks, are viviparous species in which the young hatch and develop in the womb of the female. The only such fish in Polish waters is the viviparous eelpout, which produces up to 400 juveniles in winter. What do we know about the “mother of eels”? Among fish, it has one of the longest pregnancies, lasting about 6 months. The embryos absorb food and oxygen while still in the mother’s body. Viviparous eelpouts live up to 10 years. It is a common ingredient in soups in Mediterranean countries. Their bones are green, their flesh is fat, and their skin is slimy. 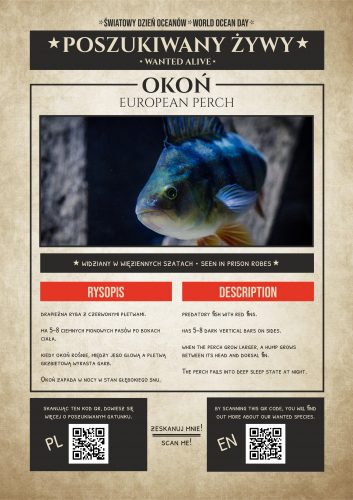 Spring is the main season of the European perch fishing.

The predatory perch falls into a kind of “deep sleep state” at night. During this time, it stays at the bottom of the reservoir leaning against it with its pelvic and caudal fins. The sleep of the fish is so deep that even a bright beam of light will not break it. After a process of waking up, lasting a few minutes, the perch extends its dorsal fin like a sail and swims away. 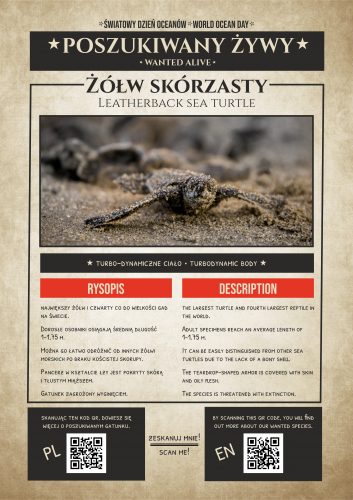 The Leatherback sea turtle returns to the place it was born at. During the breeding season, adult female comes to the same beach as its mother to lay eggs and give birth to its offspring. It lays about 100 eggs in a hole dug in warm sand, covers them and returns to the sea. After 2 months, small turtles hatch and head towards the water. It is a long journey full of dangers: birds of prey and fish. Turtles are also exposed to environmental degradation, fishing nets and over-harvesting. Turtle eggs and meat are highly prized by the people of the Pacific Ocean, and turtle nests are constantly plundered by poachers.

The largest turtle in the world weighs up to 900 kg! This giant travels a distance of 5 000 km between breeding and feeding areas. Leatherback turtle can dive to a depth of 1 000 m in search of jellyfish. 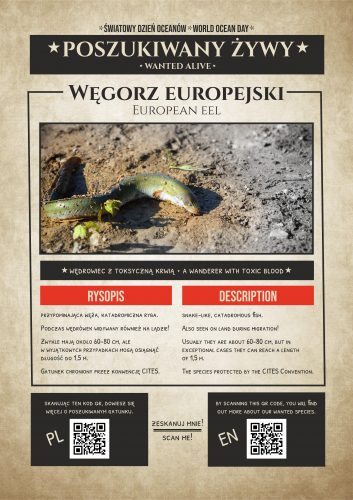 You will find it in ponds, lakes, rivers, shallow seas, and even crawling on land. After reaching sexual maturity, the eels swim to the Sargasso Sea for spawning, covering more than 5 000 km. After spawning most of them die, but the Gulf Stream already carries towards Europe transparent larvae hatched from eggs, only few millimeters long. After 3 years of migration, overgrown, 7-centimeter fish called glass eels, reach the mouths of Western European rivers. Females swim towards freshwater, while males stay in the sea close to the river mouths. You can recognize the sex of an adult fish by its size. The female is up to 2 m long, and the males up to 60 cm. 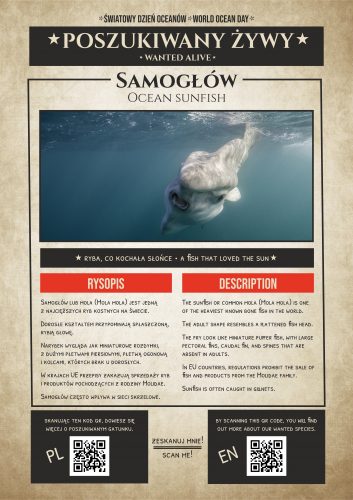 The female sunfish is one of the most fertile fish – it produces 300 million eggs at a time. What food would satisfy a 3-meter and 2-ton “floating head”? In the Atlantic, sunfish feed on eel larvae. They are also known to love sunbathing, so they swim close to the surface of the water to relax. 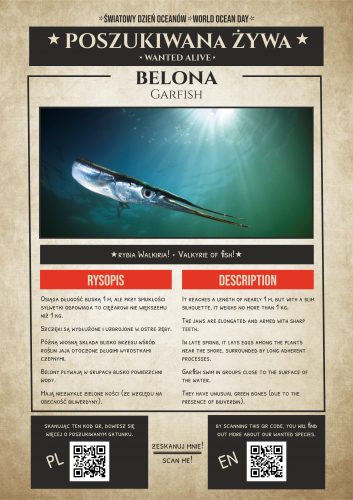 The Baltic Sea has a lot to offer to fish that seek for overgrown spawning bays. At the turn of May and June, garfish swims into Polish waters. The fish is distinguished by elongated jaws arranged in a characteristic form of sword. Jaws full of strong needle-shaped teeth hold a prey in place. These preys most often happen to be pelagic fish that the predator catches at full speed. Although garfish has no catch size nor protection period, remember that it appears close to the shore only during the spawning season, therefore fishing for garfish in the Baltic coastal and port waters is possible only after paying for a special permit issued by the Sea Fisheries Inspectorate. 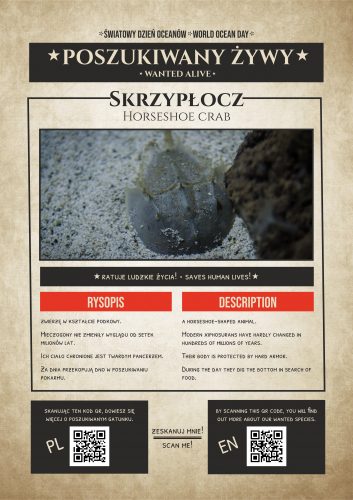 Horseshoe crabs appeared on Earth 450 million years ago, and since 1977 most people owe their lives to them. All thanks to the extraordinary properties of their milky blue blood. American scientists, Bang and Levin, noticed that the hemolymph of the Horseshoe crabs coagulates in the presence of gram-negative bacterial endotoxins. They discovered that amoebocytes are the functional equivalent of human white blood cells that protect against infection. Soon after, they developed the test used in the biomedical industry to control the microbiological purity of drugs, infusion fluids, endoprostheses, pacemakers and vaccines.

Horseshoe crabs have 9 eyes, thanks to which they see well under water, even in the dark. 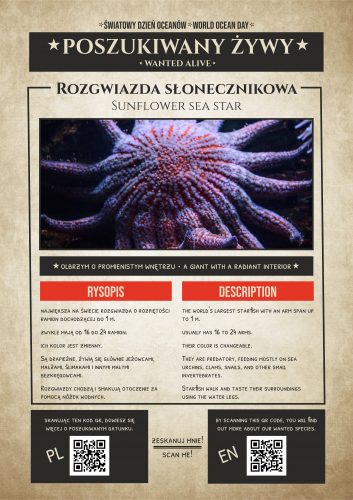 In the cool waters of the North Pacific, you can encounter an unusual echinoderm. The Sunflower sea star is one of the largest and heaviest starfish in the world. Its size depends on environmental conditions, but the arm span may be equal to the height of a small child, and its weight may be up to 5 kg. Do you think 5 arms is a lot? This starfish has up to 24 of them. Even though it does not look very mobile, it can travel up to 100 m/h thanks to its tube feet, of which it has over 15 000. Each foot is ended with a suction cup, which allows an animal to adhere to surfaces. Between 2013 and 2017, the natural population of this remarkable echinoderm was severely affected by a disease known as the ‘sea star wasting syndrome’ (SSWS). The disease manifests itself with lesions on the body that lead to death of the organism. The cause of the disease is not well known, but it is believed to be viral in origin and linked to the global warming. The SSWS reduced the global abundance of this species by over 90%. 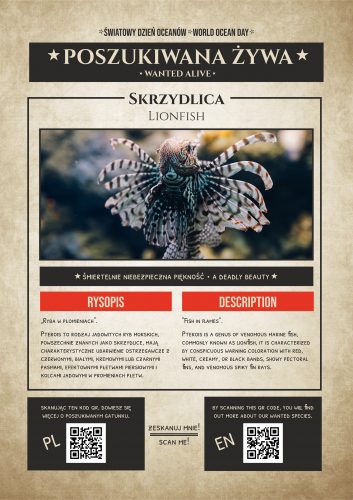 The lionfish, native to the Indian Ocean, have venom spikes and fan-shaped fins resembling a bird. Presently, after colonizing the Atlantic Ocean on the East Coast of the United States and the Caribbean, the exotic fish are launching an attack on the Mediterranean Sea. In Cyprus, which the first line of defense from invasion, attempts are taken to control this invasive species that threatens the balance of an already disturbed ecosystem.

The exponential increase in the number of lionfish in this area was a result of the Suez Canal widening in 2014 and the increase in water temperatures. Local fish easily fall prey to a predator that adjusted well to new conditions. However, the environmental protection projects do not aim to annihilate it, but to control its population. 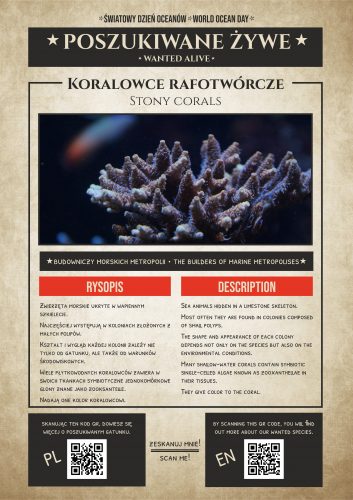 How does a “coral garden” of thousands tiny, stinging cnidarians with a calcium carbonate skeleton grow? There are two ways to do this. Corals can reproduce asexually by budding or dividing, or they await the full moon to reproduce sexually. Shortly after dark, all corals simultaneously release gametes (eggs and sperm) into the water, where fertilization occurs and a larva (planula) is formed. The water currents sometimes carry it very far from the parent reef. When it finds the suitable place to settle, it sticks to the bottom and starts a new colony. The same processes are repeated by scientists who save coral reefs. They collect gametes and place them in plantations where they grow corals that have been created by artificial insemination, or they cut a piece of the coral and it grows again. Unfortunately, the “descendant” has the same genetic material, so this method should be used with moderation and the same corals should not be planted all the time within the same damaged reefs. 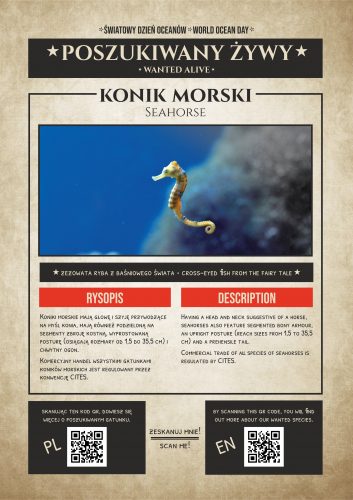 What distinguishes a fairy-tale family of seahorses? They have no scales, but they have bone armor. They have grabby tails with which they dock themselves among the reefs. Their eyeballs work independently, looking for dangers from different directions. In the mating dance, they face each other frontally. They are among few fish that swim vertically. The maternal function is performed by the seahorse male. The female spawns into his breeding pouch. The male preserves the eggs for about 2 weeks, which is followed by a “birth” lasting even up to 2 days.

Do you like this animal? If yes, then do not buy dried seahorses in the seaside resorts. All of them are listed in the CITES – Convention on International Trade in Endangered Species of Wild Fauna and Flora. 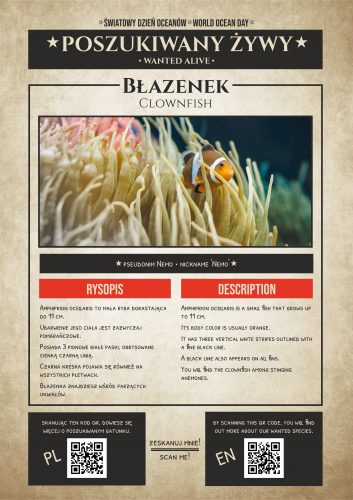 What adventures await the Ocellaris clownfish? Throughout its life, the clownfish develops a bond with an anemone ‘armed up to the tentacles’. It investigates its stinging tissue and produces a mucus suit acquiring resistance to hundreds of microscopic harpoons with anemone venom. When in danger, the clownfish securely shelters among the host’s tentacles. It is an extremely useful skill for a fish that plays hide and seek with predators, taking into account the fact that the clownfish is only 11 cm long, and the bright orange body stands out.

Spawning takes place every 27 days, during a full moon, at the base of the anemone. A pair of clownfish swims around each other, and after intercourse, the female lays up to 25 000 eggs, which the male looks after. The fry hatch after a week. A sexually mature individual first functions as a male, but may change sex when female is missing.