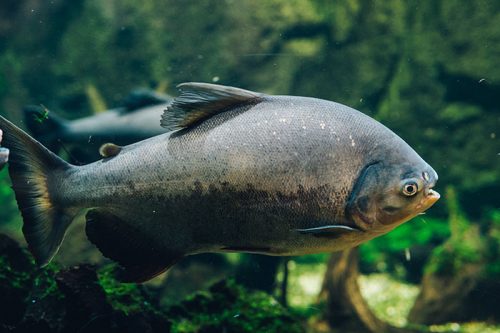 Tambaqui are the largest representative of the piranhas’ family. It lives in overgrown rivers and streams of the Amazon basin. Its characteristic feature are massive teeth. Due to its size, it needs a large aquarium, as it can sometimes attack smaller fish. It is a valued edible fish.

Pacu resembles piranha in shape and has one more thing in common with them. Both of these species fell victim to a bloody rumor that turns out to be quite innocent. In 2003, a lost representative of pacu was observed in the waters of the Baltic Sea. This initiated a considerable panic among tourists. The media reported that this fish likes in male testicles. This is absolutely not true! Pacu feeds on nuts and fruit that fall from the trees.