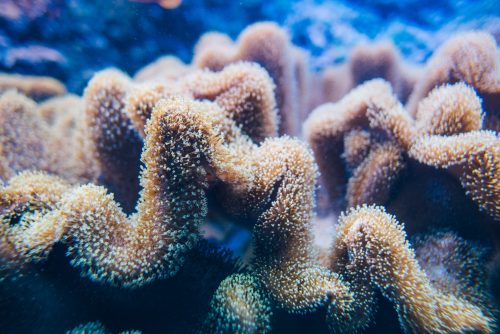 Alcyonacea are purely marine animals occurring only in the form of polyps. There are approximately 1,290 species of soft corals belonging to 6 suborders and 41 families. Representatives of this order are related to reef-forming (stony) corals, but lack the massive calcified skeleton of calcium carbonate. Instead, they have small limestone sclerites (fine spiky skeletal elements) in their bodies that provide some support and give their flesh a spiky, grainy texture that scares off predators. Several species, incl. blue coral (Heliopora) or pipe coral (Tubipora), have a solid skeleton, seemingly resembling hard corals. Moreover, their polyps always have 8 arms, unlike the stony coral polyps which have 6 or a multiple of 6.

Soft corals are one of the most colorful and diverse groups of invertebrates found on coral reefs. They create colonies of various forms, incl. membranous, inlaid, massive, lobed, finger-shaped, woody, fan-shaped, bushy and whip-shaped. In the Caribbean, branching gorgonians and sea fans are the predominant forms of growth, while in the Pacific they are much more diverse, including fleshy corals as well as gorgonians. Although soft coral colonies do not contribute to reef growth, they provide shelter for many reef dwellers. Many animals, such as hydrophilic species, hydrozoans, bryozoans, crinoids, molluscs, crustaceans, and fish, find their shelter among corals, largely only on specific coral colonies. Many species of seahorses look similar to their hosts, thanks to which they perfectly camouflage themselves, eg. Hippocampus bargibanti inhabits only two species of the corals of genus Muricella and Hippocampus denise (fine seahorse) inhabits, i.a., colonies of corals of the genus Muricella, Anella and Echinogorgia.

Soft corals include species with different biological characteristics and different ecological requirements. Many species are long-lived with a slow growth rate, while others are fast colonizers with a short life span. Some large colonies of the genus Sinularia (family Alcyoniidae) are probably hundreds of years old. The life expectancy and growth rate of most soft corals is largely unknown as colonies can shrink, due to both biological and physical factors, so there is a poor relationship between colony size and age.

Most soft corals, unlike stony corals, thrive in nutrient-rich waters with less intense light. Their food consists of small particles caught directly from the water column in the form of phytoplankton, fine particles of detritus, ciliates, flagellates and very small zooplankton. In addition, almost all of them use a symbiotic relationship with photosynthetic zooxanthella (alga) as their primary energy source. In return, the coral provides the algae with nutrients and shelter. This symbiosis depends on the availability of light for photosynthesis. There are taxa that do not bond with algae. Their only food is particles suspended in water, so they are highly dependent on water currents, therefore they occur in habitats with a large flow of water. They can be easily distinguished from those living in symbiosis with algae by their light yellow, orange, red, pink, purple or snow-white color.

The dispersal strategies for soft corals vary between species, and include both asexual and sexual reproduction. Rapid colonization of small surfaces of the substrate is mainly related to asexual reproduction. It often involves the formation of stolons, the budding of miniature colonies which then fall off the parent colony and settle nearby, and fragmentation. Larger areas of the bare substrate are usually colonized by settling pelagic larvae formed by sexual reproduction. Then, mature individuals release their gametes into the water column, where fertilization takes place. The resulting pelagic larvae are scattered by currents over long distances. Once they reach the right size, they will settle down to days or weeks after conception. Fertilized eggs of some species remain attached to the mother colony, and the resulting larvae develop on the surface of the colony. After a few days it separates and settles to the bottom near the mother colony.

Many species protect themselves from predators, algae or contamination by neighboring organisms by releasing repellants, which are sometimes toxic. Many of these substances have been tested for their bioactivity, and some of them may become useful in the pharmaceutical industry. The main defense products are terpenoid in origin and despite their toxicity to fish, some specialized fish species are able to feed on corals. E.g. corals of the genus Sarcophyton sp. produce toxic sarcophytoxide, which released to aquatic environment causes reduction in the photosynthesis of the algae living in the symbiosis with coral Acropora formosa. Thus, it serves not only as a means of protection against being eaten by predators, but also provides an advantage in competing for living space with other corals. Sarcophytoxide, however, is not an obstacle for the gastropod Ovula ovum, which feeds on those corals and the toxin most probably is metabolised and detoxified in the intestines of the snail. Among the representatives of the gorgonias, such as the species Leptogorgia virgulata, there are substances such as lophotoxin. Their main task is to scare off the fish through stimulating vomits. In addition, they have antimicrobial properties, preventing coral overgrowth. Antarctic corals are protected either exclusively by limestone splinters or by chemicals. Eg., coral Ainigmaptilon antarcticus produces sesquiterpene that prevents starfish from feeding and inhibits development of the bacteria and diatoms. Separate strategy of the chemical defense can be observed in species Plexaura homomalla that produces large quantities of toxic prostaglandines and make the coral flesh untasty for, e.g., fish.

Soft corals are animals that produce many bioactive compounds with various effects, including antibacterial, antiviral, anticoagulant, antidepressant, antihypertensive, analgesic, anthelmintic, etc. Therefore, they are very commercially important. They are very easy to breed in captivity, much easier than hard corals that are susceptible to infection or damage. Soft corals grow quickly and are easy to divide into new individuals, therefore aquacultured corals are often more durable and cheaper than those imported from nature. Moreover, thanks to such farms it is possible to protect wild reefs. In the past it was believed that soft corals are not able to produce new fundaments for future coral reefs, however, recent discoveries suggest that the colonies of the genus Sinularia have an ability to cement their sclerites and fix them at the base, what makes them reef-building animals.