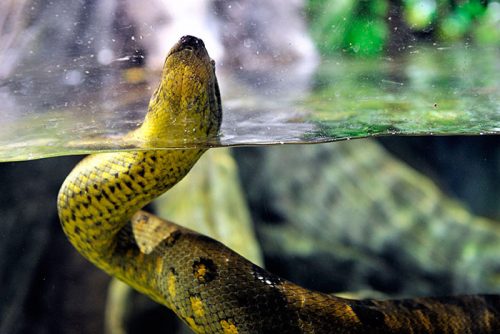 Legends about the deadly man-eaters, reaching monstrous dimensions, have often found their reflection in mass culture. Certainly they were the inspiration to create entertainment class B movies. The Green anaconda belongs to the subfamily boa (Boa). It is noteworthy that all anacondas are found only in South America and are viviparous.

The animal leads an amphibious lifestyle. This snake inhabits shallow, slowly flowing freshwater habitats, as well as tropical meadows and rainforests with dense litter. The Latin part of the name Eunectes comes from the Greek language and means “good swimmer”. On land it is slow and sluggish while in water it can reach speeds of up to 20km/h. The Green anaconda has pronounced sexual dimorphism. Males grow up to about 3 meters in length, while females rarely exceed 6 meters and these are cases mainly of captive individuals.

Anaconda definitely doesn’t hunt people. On the contrary. The folklore of indigenous peoples of Brazil and Peru considers this creature magical, which is why body parts are sold for the purpose of performing rituals and treating various ailments. It should be noted that this strangler is one of the few snakes whose body proportions in fact would allow human consumption. However, our body structure, and precisely the shoulder width and width do not allow us to join this reptile’s menu. All snakes in the world swallow their prey starting from the head, so especially for us, the Green anaconda would have to change its current hunting technique. If it comes to meeting a human, the snake will try to bury itself in the litter or mud, or run to the nearest water. If that’s not enough, it will shoot a smelly substance  towards the attacker from the anal glands.

The Green anaconda, despite its deadly snake patch, is not really a threat to humans. Scientists agree that the population of this species, although still stable, requires protection. Shrinking habitats, caused by draining wetlands for arable fields and massive felling of forests cause that there is slowly no more place in the world for this snake. Hunting does not help in the condition of the species. Despite its longevity, strong anthropopressure, unfortunately, does not allow these reptiles to grow to a larger size in peace. If this continues the fate of the anaconda, it will inevitably turn out that we will only be able to admire six-meter specimens in zoos. Environmental degradation, as well as man himself, contribute to the fact that the impressive dimensions of this reptile are significantly reduced.

The Green Anaconda is included in Appendix II of the CITES.