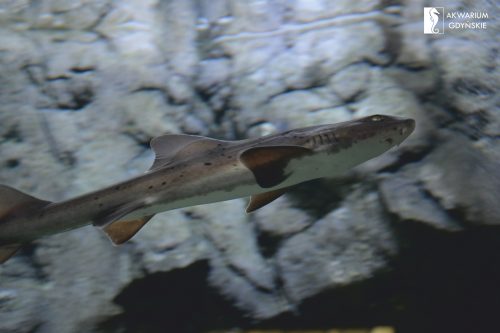 This representative of cartilaginous fish inhabits the northwestern Pacific Ocean from southern Siberia, through Japan, Korea and China, to Taiwan. It is associated with the bottom of continental shelves, from very shallow depths up to 150 m. It tolerates lower salinity, which is why it is often found in estuaries and shallow bays, especially in sandy and vegetated areas, including seagrass medows. This medium-sized shark species grows up to 1.5 m in length. Males live 15 years, females 18. They lead a nocturnal life. During the day they look for hiding places, including in the caves.

The Banded houndshark is a solitary species, but sometimes it rests in groups of several individuals lying on top of each other. Its food preferences change with age. Also, the larger the shark, the more varied its diet. The basis of the diet of young individuals are various fish. Mature sharks feed on benthic invertebrates such as sea bream, crustaceans (e.g. shrimps, crabs and mantis prawns), as well as cephalopods, including octopuses. Less often they eat polychaetes, tunicates and small bottom fish such as flatfish, conger eels and herring.

The body of this species has a gray color on the dorsal part and a bright belly. In juveniles, darker stripes and dots are visible on the back, which fade with age. Its mouth is short, wide and rounded. Horizontally-oval eyes are placed high on the head. The mouth opening forms a short, wide arch and has long furrows in the corners that extend to both jaws. It has two dorsal fins, with the second one being slightly smaller. The caudal fin has a well developed lower lobe and a prominent notch near the top of the upper lobe. In juveniles, the lower lobe of the caudal fin is much less pronounced. Reproduction occurs in late summer.

Courtship is brutal, the male swims parallel to the female and grabs her with teeth by the pectoral fin. Then she twists her body so that copulation is possible.

It is an egg-bearing species, which means that the female produces eggs, but they remain in her body until the juveniles are ready to hatch. The female produces from 9 to 26 eggs, although batches as large as 42 young are also possible. Incubation lasts from 9 to 12 months. Juveniles are 18-20 cm long after hatching. Males reach maturity at the age of 5-6 years at a length of 93-106 cm, while females mature at the age of 6-7 years, when they are 106-107 cm long. The Banded houndshark does not pose a threat to people and adapts well to life in captivity. It is sometimes fished as by-catch (organisms accidentally entering the net), but its meat is not commonly consumed.

Triakis is a typical cartilaginous fish. Due to its position in the process of evolution, both Banded houndshark and other shark species are used as genetic model species. Already in the 1970s, several biological substances derived from sharks were used in medicines or food additives. These included shark liver squalene, which was used in medicine and cosmetics, as well as shark cartilage extract, which strengthens bones and joints. For decades, more bioactive substances or biomaterials derived from sharks have been sought after, which is be useful in both medicine and industry.