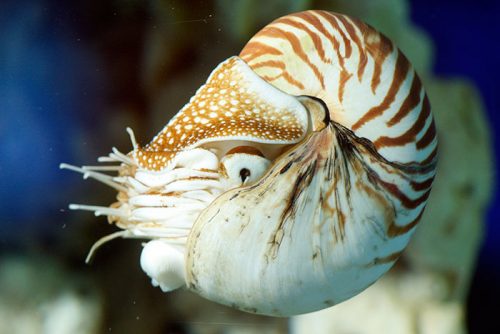 The outer shell in cephalopods occurs in the most primitive group – nautiluses. Although they are often called “living fossils”, modern nautilus has appeared relatively recently. Their structure resembles Mesozoic ammonites. The calcareous shell of the nautilus is spirally twisted and divided into several chambers. The animal’s body is housed in the largest shell chamber closest to the opening. Each of the chambers is separated by a partition in which there is a hole for a siphon, a cylindrical outgrowth of the torso. The nautilus can move both horizontally, in a jet movement, throwing a stream of water through a funnel, and vertically, changing the proportions of gases and fluids filling its shell. Nautils have about 80-90 arms surrounding the mouth. They feed on small crustaceans, fish, dead organisms, sometimes other dinghies. Their arms are devoid of suction cups, but they produce a sticky substance. Animals acquire food mainly using smell. Their eyes have a simpler structure compared to the evolutionarily younger cephalopods, such as octopus. Nautils need about 10-15 years to reach puberty. Therefore, overfishing is a big threat to them.

Because of the magnificent shells, nautilus is sold live or their shells are prepared for souvenirs for tourists. In addition to aesthetic values, their shells use the inner pearl layer as a substitute for pearls. Nautilus is a species from the CITES list.