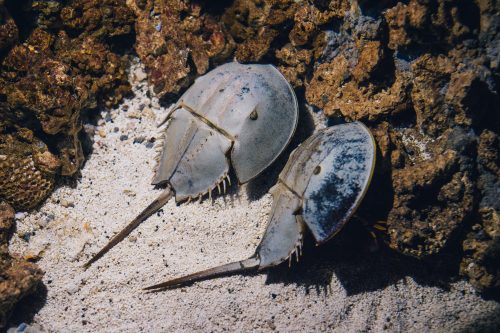 The horseshoe crab belongs to one of the oldest orders of marine arthropods. Although it is called “the horseshoe crab”, it is more closely related to spiders, ticks, mites and scorpions than to crabs. It occurs along the east coast of North America from the state of Maine through Florida and the Gulf of Mexico to the Yucatan Peninsula, with peak numbers in the Bay of Delaware. There are distinct populations of the horseshoe crab along this range. It inhabits shallow coastal waters with sandy or muddy bottoms, such as lagoons, estuaries and mangroves, from 3 to 11 m deep. It usually buries in the ground or moves along the bottom, sometimes swims upwards using its flap-shaped gills as oars.

The horseshoe crab is long-lived and is slow to mature compared to most other groups of invertebrates. Males reach sexual maturity between 9 and 11 years of age, and females between 10 and 12. The maximum documented life expectancy of this species was 20 years. It has a maximum length of 60 cm and a weight of 1.8 kg. His body is made up of three parts – the head (prosoma) area, the torso (opisthosoma) and the tail (telson) area, and is covered by a horseshoe-shaped shell. The color of the armor ranges from greenish gray to dark brown. There are 6 pairs of legs on the underside of the prosoma. The first one, a short one that looks like tongs, is used to introduce food into the mouth. The next 4 pairs end with claws and are used to move around, and the last pair has a leaf-like structure at the end for repulsion. On the ventral side of the torso there are another 6 pairs of legs. The first one contains the genital orifices and the other 5 are modified into flattened plates serving as gills. In addition to their respiratory function, they also act as oars while swimming. The tail serves as a rudder when swimming.

The horseshoe crab’s diet is based on algae, polychaetes and molluscs. Since the horseshoe crab has no jaws, the trapped food is crushed before being placed in the mouth. The further treatment takes place in the stomach which is composed of sand and gravel. 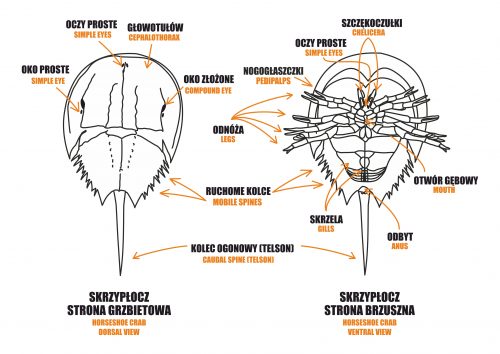 The horseshoe crab is a dioecious animal. There are no clear differences in appearance between females and males, they only differ in size. Females are typically 25-30% larger than males and can reach over twice as much weight. Spawning usually occurs in the tidal zone and is correlated with the spring tides (spring tides are characterized by the highest tide water level and the lowest tide, and they are not related to the season, but to the alignment of the sun, earth and moon in a line). The length of the breeding season varies. Northern populations (all in the United States, except southern Florida) reproduce from spring to fall, while southern populations (southern Florida and the Yucatan Peninsula) reproduce year-round. In the north, the signal for spawning is triggered by rising temperatures, while in the Yucatán Peninsula, decreasing temperatures stimulate it. Males are the first to start their spawning journey. When they come across females, a second pair of crotch legs, which are equipped with claws similar to a boxing glove, attach to their carapace. The male may be attached to the female for several months. Often several males are kept by one female. Females arrive at the beach at high tide and lay 15,000 to 64,000 in a nest dug in the sand to a depth of about 15-20 cm. After the female lays a batch of eggs, the male or males fertilize them with sperm. After hatching from the egg, the larvae swim continuously for hours. Despite the possibility of wide dispersion during free swimming, many larvae settle in shallow waters near the beaches where they hatched. Already about 20 days after fertilization, the juveniles moult for the first time (shedding their carapace when increasing body size). As they grow, they move to deeper regions. By the time they reach puberty, they will moult about 17 times.

The horseshoe crab plays an important role in the marine ecosystem. It or its eggs are food for sea turtles, alligators, waders, and many species of fish. Its eggs also food for coastal birds and its juveniles and mature individuals are eaten by sea turtles. Its armor is colonized by various organisms, such as algae, bryozoans, tunicates, molluscs and barnacles. In addition, it supports the diversity, richness and abundance of benthic species by aerating the substrate while searching for food. It also has applications in the biomedical and pharmaceutical industries. Its excessive fishing as bait for fish led to a significant decline in the horsetail population.

Horseshoe crabs are often referred to as ‘living fossils’ because they have changed little in the last 445 million years. An extinct, only 4 cm, horseshoe crab of the species Lunataspis aurora was identified in the Ordovician strata. Until recently, the genus Limulus was thought to date only 20 million years ago, but the discovery of Limulus Darwin pushes it to at least the Late Jurassic, 148 million years ago. Limulus polyphemus is believed to be the closest living relative of trilobites.

An animal with 9 eyes

There are two types of eyes on the prosome – compound (ommatidia) and simple (ocelli). The horseshoe crab has a total of 9 eyes. Two large compound eyes are located on either side of the head. They ensure monochrome vision, i.e. it can not distinguish colors. There are also 5 straight eyes on the prosome. The straight eyes are also on the ventral side of the prosoma, just in front of the mouth. Straight eyes are likely to play an important role in embryonic and larval development. The less sensitive compound eyes and straight eyes located in the middle of the carapace become the dominant sight in adulthood. In addition, along the entire length of the tail there are several organs that perceive light stimuli.

The remarkable power of blood

The horseshoe crab blood is different in composition from our blood, it does not contain iron-containing hemoglobin, but copper-containing hemocyanin. Hemocyanin is colorless when deoxidized and blue when exposed to oxygen. Due to the fact that the horseshoe crab lives in a cold environment with low oxygen saturation, its blood is gray-white or pale yellow. In case the animal is injured, the outflowing blood will be blue. Its specific reaction to endotoxins, i.e. dangerous compounds released by certain bacteria, is desirable in the medical and pharmaceutical industries. On contact with them, the blood will clot. Pharmaceutical companies that make intravenous solutions, antibiotics, and kidney dialyzers use this feature to test the safety of their products. It is also used to study several bacterial diseases. The Horseshoe crab blood enzymes are used by astronauts at the International Space Station to test surfaces for unwanted bacteria and fungi. Pharmaceutical companies have developed a method that allows about 1/3 of the total volume of blood to be taken from an individual and then released back into the environment. Blood volume should return to normal within about a week, and such individuals have up to 90% chance of survival.